We describe a near-complete, three-dimensionally preserved skeleton of a metatherian (relative of modern marsupials) from the middle Eocene (Lutetian: 44–43 million years ago) Lülük member of the Uzunçarşıdere Formation, central Turkey. With an estimated body mass of 3–4 kg, about the size of a domestic cat (Felis catus) or spotted quoll (Dasyurus maculatus), it is an order of magnitude larger than the largest fossil metatherians previously known from the Cenozoic of the northern hemisphere. This new taxon is characterised by large, broad third premolars that probably represent adaptations for hard object feeding (durophagy), and its craniodental morphology suggests the capacity to generate high bite forces. Qualitative and quantitative functional analyses of its postcranial skeleton indicate that it was probably scansorial and relatively agile, perhaps broadly similar in locomotor mode to the spotted quoll, but with a greater capacity for climbing and grasping. Bayesian phylogenetic analysis of a total evidence dataset comprising 259 morphological characters and 9kb of DNA sequence data from five nuclear protein-coding genes, using both undated and “tip-and-node dating” approaches, place the new taxon outside the marsupial crown-clade, but within the clade Marsupialiformes. It demonstrates that at least one metatherian lineage evolved to occupy the small-medium, meso- or hypo-carnivore niche in the northern hemisphere during the early Cenozoic, at a time when there were numerous eutherians (placentals and their fossil relatives) filling similar niches. However, the known mammal fauna from Uzunçarşıdere Formation appears highly endemic, and geological evidence suggests that this region of Turkey was an island for at least part of the early Cenozoic, and so the new taxon may have evolved in isolation from potential eutherian competitors. Nevertheless, the new taxon reveals previously unsuspected ecomorphological disparity among northern hemisphere metatherians during the first half of the Cenozoic.

Etymology: Anatolia (Greek): the geographic name for the Asian part of Turkey; delphys (Greek): uterus, a common suffix for marsupials and their fossil relatives; maasae: in honour of Dr. Mary Maas and her contributions to Paleogene mammalian palaeontology, particularly in Turkey.

Holotype: Ankara Üniversitesi Jeoloji Müzesi (AÜJM) specimen 2002–25, which comprises a fragmented partial cranium, both dentaries, and associated postcranial elements, including most of the vertebral column, partial pectoral and pelvic girdles, all of the long limb bones, both calcanei, two metapodials, and a few phalanges.

Locality and age: AÜJM 2002–25 was collected from the Lülük member of the Uzunçarşıdere Formation (UCF), which is part of the small Orhaniye-Güvenç sedimentary basin located at the northwestern edge of the city of Ankara, approximately 5 km southwest of the town of Kazan, in central Turkey. The Lülük member is the lowest of the three members currently recognised within the UCF (together with the Gökdere [middle], and Sarıbeyler [upper] members), and is the source of all fossil mammals known from the UCF to date. AÜJM 2002–25 is from locality AK33, which is approximately 90m above the base of the UCF, at Memlik village. Until recently, the age of the UCF was poorly constrained, but a combination of U-Pb dating of zircons and magnetostratigraphy now support a date of 44–42 MYA (= Lutetian) for the formation as a whole, and 44–43 MYA for the Lülük member.

Diagnosis: Anatoliadelphys maasae differs from all other metatherians in the following combination of features: comparatively large size (estimated body mass 3–4 kg); premolars increase markedly in size posteriorly (occlusal area of p1 less than one sixth that of p3); P3 and p3 very large (similar in occlusal area to M2 and m2 respectively) and also broad (labiolingual width:mesiodistal length ratio is 0.89 for P3 and 0.7 for p3); modified tribosphenic molar dentition, in which M1-3 and m1-4 increase markedly in size posteriorly (occlusal area of M1 approximately one third that of M3; occlusal area of m1 approximately one seventh that of m4); upper molars with cingula extending along the anterior and posterior margins; protocone large but conules indistinct or absent; metacone taller than the paracone on M3 but smaller than the paracone on M4; centrocrista v-shaped on M3, with the premetacrista extending labially to stylar cusp D; centrocrista straight on M4; parastylar lobe very large on M4; anterior cingulid weakly developed on m3-4; m4 trigonid dominated by enormous protoconid, with paraconid and metaconid both greatly reduced; preentocristid and cristid obliqua of m3-4 both with carnassial notch; posterior cingulid present but very faint on m3-4; strongly curved radius and tibia; femur with prominent third trochanter, well-marked trochlea and distal condyles of approximately equal width; calcaneus with medially-inflected tuber, large peroneal process with prominent groove for peroneus longus tendon, concave calcaneocuboid facet, and prominent pit (probably for plantar calcaneocuboid ligament) on ventral surface. 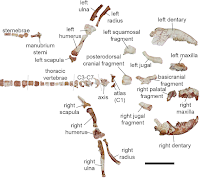 Cenozoic carnivore from Turkey may have evolved without placental competitors  phy.so/422094230 via @physorg_com
Ancient Carnivorous Dread-Possum Is Upending The History Of Mammals | Gizmodo Australia (via @GizmodoAU)  www.gizmodo.com.au/2017/08/ancient-carnivorous-dread-possum-is-upending-the-history-of-mammals/