ABSTRACT
The paleobiogeographic significance of continental Africa during the middle and Late Cretaceous is not well understood, in part due to incomplete sampling from large portions of the landmass during these intervals. Intensified field efforts in the Galula Formation exposed in southwestern Tanzania have revealed a diverse vertebrate fauna, including the novel titanosaurian Shingopana songwensis, gen. et sp. nov., described herein. Based on a left angular, cervical vertebrae, cervical and dorsal ribs, a left humerus, and a partial left pubis, Shingopana exhibits morphology indicating affinities with the Late Cretaceous aeolosaurine titanosaurians of South America. The bulbous expansion of the cervical vertebral neural spine is similar to the condition in Bonitasaura salgadoi, Overosaurus paradasorum, and Trigonosaurus pricei. The dorsal ribs of Shingopana also present proximal anterior and posterior flanges that previously were proposed to be unique to Overosaurus. Furthermore, Shingopana is diagnosed by a divided spinoprezygapophyseal lamina in the middle-to-posterior cervical vertebrae. Parsimony and both uncalibrated and tip-dated Bayesian phylogenetic approaches support Shingopana as the first African titanosaurian that is closely related to aeolosaurines. Comparisons with other African titanosaurians, such as the co-occurring Rukwatitan bisepultus and geographically proximate Malawisaurus dixeyi, suggest that southern African forms represent diverse taxa rather than forming a monophyletic group. Moreover, southern African forms exhibit stronger affinities with South American clades than with representative northern African form, suggesting that tectonically driven separation of the two landmasses may have influenced the development of progressively isolated southern African faunas throughout the Cretaceous.

Etymology—Shingopana, ‘shingo’ is the Kiswahili word for neck and ‘pana’ is the Kiswahili word for wide, in reference to the bulbous expansion of the neural spine exhibited by the wellpreserved cervical vertebra A. The Latinized specific epithet, songwensis, refers to the Songwe area and geologic sub-basin of southwestern Tanzania from which the type specimen was recovered. 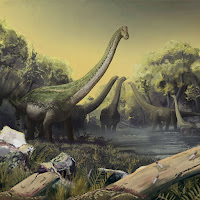