Abstract
Melicope stonei K.R. Wood, Appelhans & W.L. Wagner (section Pelea, Rutaceae), a new endemic tree species from Kaua‘i, Hawaiian Islands, is described and illustrated with notes on its distribution, ecology, conservation status, and phylogenetic placement. The new species differs from its Hawaiian congeners by its unique combination of distinct carpels and ramiflorous inflorescences arising on stems below the leaves; plants monoecious; leaf blades (5–)8–30 × (4–)6–11 cm, with abaxial surface densely tomentose, especially along midribs; and very long petioles of up to 9 cm. Since its discovery in 1988, 94 individuals have been documented and are confined to a 1.5 km2 region of unique high canopy mesic forest. Melicope stonei represents a new Critically Endangered (CR) single island endemic species on Kaua‘i.

Diagnosis: Differs from Hawaiian congeners by its combination of distinct carpels and ramiflorous inflorescence; plants monoecious; leaf blades (5–)8–30 × (4–)6–11 cm, with abaxial surface tomentose, especially along midribs; and very long petioles of up to 9 cm.

Etymology: We are pleased to name Melicope stonei in honor of Benjamin Clemens Masterman Stone, British-American botanist, born in Shanghai, China in 1933 and passed in 1994 while working at the Philippine National Museum on the Flora of the Philippines Project. He contributed over 300 publications to science during his career, including taxonomic monographs of Hawaiian Pelea (Stone 1969) and Platydesma (Stone 1962). For all his contributions, especially his keen insights into Hawaiian Melicope, we gratefully extend him due recognition. 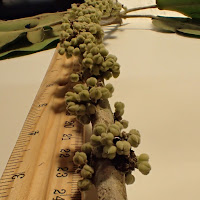 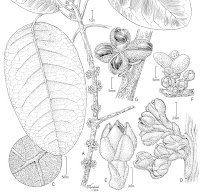