Abstract
Traditionally small-scale populations of Capoeta in the Tigris River drainage are identified as Capoeta damascina. The recent finding revealed that some populations of small-scaled C. damascina species group are not identified as any described species. We examined these populations and the results showed that there are pronounced differences between them in morphological and molecular characters. Therefore based on differences found, here we describe three new small-scaled Capoeta species from Zohreh, Tireh and Gamasiab Rivers, Tigris River drainage, Iran.

Distribution: Capoeta ferdowsii is known from the Zohreh and Fahlian Rivers in Tigris river drainage (Fig. 7).
Etymology: The species is named to honor of Abu Al-Qasim Ferdowsi Tusi (Persian: وسمس ابوالقاسمفردوسیسمسر (a Persian poet and the author of Shahnameh book which is the world's longest epic poem created by a single poet, and the national epic of Greater Iran. 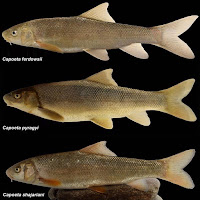