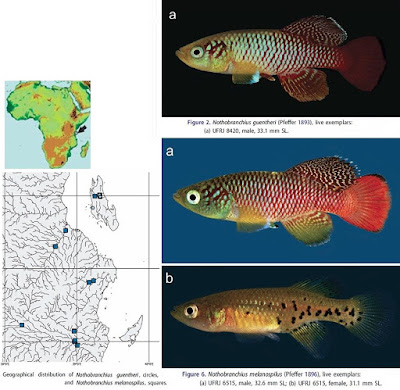 ABSTRACT
Nothobranchius guentheri and Nothobranchius melanospilus, the two seasonal killifishes of the genus Nothobranchius occurring in Zanzibar Island, Tanzania, were involved in past taxonomical mistakes and are still misidentified in museum collections. A historical review is herein presented and both species are redescribed on the basis of type material and recent collections. Nothobranchius guentheri, a popular aquarium fish, is endemic to Zanzibar, and N. melanospilus, geographically widespread in East Africa, occurring both in Zanzibar and in continental river basins. These species are distinguished by a series of morphological features not previously reported in the literature, including pre-dorsal length and relative position of the anterior portion of the dorsal-fin skeletal support and vertebrae; number of gill-rakers of the first branchial arch, caudal-fin rays, scales of the longitudinal series, series of scales around caudal peduncle, and vertebrae; frontal squamation; and arrangement and number of neuromasts of the supraorbital series. The present taxonomic revision comprising N. guentheri and N. melanospilus, the oldest species names of the genus in the East African biodiversity hotspot, is important to improve the knowledge of the genus in a region where its taxonomy is still problematic 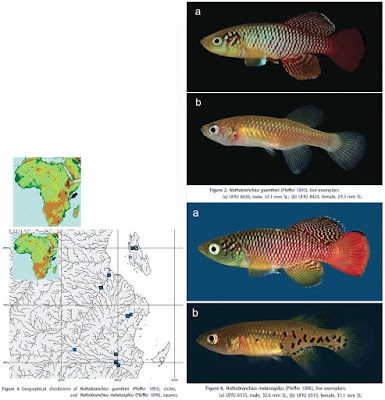