Melanorivulus nelsoni, new species, is described from a stream draining into the upper rio Paraguai basin, in the municipality of Juscimeira, State of Mato Grosso, Brazil. It is distinguished from all other congeners, except M. pictus (Costa) and M. planaltinus (Costa & Brasil), by the lack of the pelvic fin and girdle (although only in M. nelsoni they are invariably absent). Furthermore, M. nelsoni is distinguished from all other congeners, except M. pindorama, M. pinima and M. rutilicaudus, by having 10 transverse series of scales. Additional characters are provided to distinguish M. nelsoni from these and other congeners. The analysis of a large number of M. pictus specimens showed that this species occasionally exhibits a single or no pelvic fins. We found phenotypical evidence that the absence of pelvic fins in Melanorivulus species is likely genetically controlled by an allele that, when in heterozygosity, may result in unpredictable phenotypes. Data gathered from literature, along with our own results, suggest that the Cyprinodontiformes, especially the Cynolebiidae and the Cyprinodontidae, have a particularly high probability of evolving absence of pelvic fins, which is usually associated with body elongation. We suggest that in the case of Cyprinodontiformes this evolutionary trend might be related to the shape and position of the vertical fins. 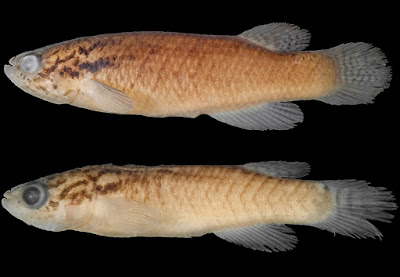