[Herpetology • 2017] Thamnodynastes phoenix • A New Species of Thamnodynastes (Serpentes: Dipsadidae: Tachymenini) from the Open Areas of central and northeastern Brazil

Abstract
The genus Thamnodynastes Wagler, 1830 is currently composed by nineteen species of viviparous and opistoglyphous snakes, largely distributed in South America, from Colombia to Argentina. The analyses of a large data set of specimens from South American collections evidenced one unknown species from the open formations of central and northeastern Brazil, which is described here. The new species is distinguished from all its congeners by a unique combination of characters, including 19 dorsal rows of smooth scales on the midbody, the smallest number of subcaudals in the genus, and a distinct hemipenial morphology and coloration pattern. To define this new species we present robust diagnostic characters and discuss comparisons with other species of this diverse and taxonomically complex genus of Neotropical snakes.

Diagnosis: Thamnodynastes phoenix sp. n. differs from all other species of the genus by the following combination of characters: 19/19/15 dorsal rows with smooth scales; maximum SVL 495 mm; maximum TL 136 mm; ventral scales 133 to 159; subcaudals 40 to 66; coloration of the ventral portion of the head extremely spotted with dark-brown dots, infralabials and chin shields with a white centre. Darkening intensifies on the infralabial borders, outlining a clear contrast of lateral and dark margins (Fig. 2). Two pairs of noncontinuous longitudinal dark ventral stripes, darker at the transition of the venter and the lateral sides, with a more conspicuous black spot on the apex of each ventral scale; tip of the tail lighter than the overall body coloration without blotches or dots, almost white in juvenile specimens.

Distribution: Thamnodynastes phoenix sp. n. occurs on open savannas of Brazil, predominantly the Caatinga formation of northeastern Brazil, in the states of Alagoas, Bahia, Ceará, Paraíba, Pernambuco, Piauí, Rio Grande do Norte, and Sergipe, extending to the Caatinga enclaves of the region of Jaíba, Minas Gerais. It also encompasses the Cerrado in central Brazil, in the states of Goiás, Tocantins and Minas Gerais (Fig. 6).

Natural History: The inspection of a few dissected specimens confirmed the viviparous reproductive mode of this species, as expected for members of the tribe Tachymenini. The specimen MZUSP 10462 (SVL 407 mm) exhibited eight well-developed embryos. The species is predominately terrestrial and nocturnal, feeds on frogs, and is associated with different types of Caatinga and Cerrado vegetation (Guedes et al. 2014).

Etymology: The specific epithet phoenix (Greek: φοῖνιξ phoinix; Latin: phoenix, phœnix, fenix) refers to the mythological bird that dies in combustion and subsequently rises from ashes in a cycle of life and death. This name acknowledges the fact that the previously selected holotype, used originally for the species description, was lost in the fire that consumed 90% of the Herpetological Collection “Alphonse Richard Hoge” of the Instituto Butantan, on March 15, 2010. Some specimens, including two paratypes, were rescued from the fire, and the data previously collected from the lost specimens were kept and used herein. 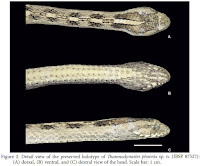