A new species of the freshwater crab genus Sundathelphusa Bott, 1969 (Gecarcinucidae) is described from the island of Mindanao in the southern Philippines. The Philippine Islands host the greatest species diversity of this genus, although only four species were previously known from Mindanao. The new species is most similar to S. mistio (Rathbun, 1904) and S. montanoanus (Rathbun, 1904) in the general carapace outline and leg proportions, but it can be distinguished by features of the carapace, thoracic sternum and gonopods. With this discovery, there are now 29 species of Sundathelphusa known from the Philippines.
Keywords: South Cotabato; Michael Türkay; Decapoda; Lake Sebu; taxonomy; Biodiversity; Mindanao 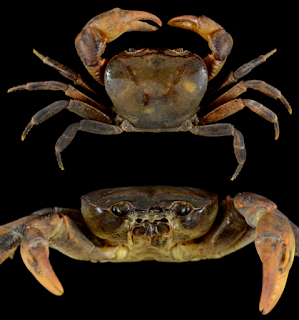