The White-spotted Skink Lygosoma albopunctatum, a rarely recorded lizard, has been re-sighted from its type locality: Madras in the Coromandel Coastal Plains. Morphological details and field notes on the findings are elaborated. Since many past surveys in and around Madras, and in southern India generally, did not record this species, lack of consensus about its existence in southern India had developed, leading to published misconceptions about its distribution. These are highlighted and corrected herein. The species is also illustrated in life based on topotypical examples.

DISCUSSION:
A study on the molecular phylogeny of Indian Lygosoma species (Datta-Roy et al. 2014) remarked that this species, though often assigned to the genus Riopa, is nested within Lygosoma. The study also delineates that the sampled congeners of the Indian radiation “are largely confined to the Indian subregion except L. albopunctata (sic) which is also distributed in mainland Southeast Asia” (Datta-Roy et al. 2014). Their phylogenetic tree reveals weak genetic structure within multiple populations of L. albopunctatum sampled from multiple unspecified localities. Though Datta-Roy et al. (2014) recovered an Indian endemic Lygosoma pruthi (Sharma 1977) as a sister to a Southeast Asian radiation they did opine that the Indian radiation consisted of, apart from the endemics, two widespread species L. punctatum and L. albopunctatum.

Stoliczka (1872) stated that individuals from south India have a rather uniform brown back whereas those from Bengal have black spotted lines along six median scale rows down the back, almost resembling L. punctatum. Ahmed et al. (2009), Islam & Saika (2013) and Sarker (2014) all illustrated L. albopunctatum from the Eastern Himalayan and Brahmaputhra regions. The photographs clearly show a more orangish tail in juveniles, contrasting with their brown trunk colour. Given the enormous distance and geo-ecological differences between peninsular and northeastern parts of the Indian subcontinent, such variations and tail colour difference in young ones might indicate cryptic diversity of Indochinese populations. In fact some literature (e.g., Das 2010) that currently ascribes as L. albopunctatum actually excluded its original definition by virtue of type series and / or type locality, as elaborated herein. Nevertheless, even admitting such lack of consensus on its global distribution and population systematics, it is here clarified beyond doubt that this species is very much present in southern India, especially along the Coromandel Coastal Plains (also see Ganesh & Chandramouli 2007; Nath et al. 2012), where lies its type locality. 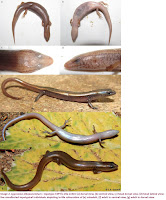