[Herpetology • 2017] A Multilocus Phylogeny of the Genus Sarcohyla (Anura: Hylidae), and An Investigation of Species Boundaries Using Statistical Species Delimitation

Highlights
• We present a phylogenetic analysis of 17 species of the genus Sarcohyla using data from two mitochondrial (ND1 and 12s) and three nuclear genes (Rag-1, Rhod, and POMc).
• The widely distributed species S. bistincta is a complex of at least three species.
• Two undescribed species exists in the group.
• The species S. ephemera is a junior synonym of S. calthula.

Abstract
The genus Sarcohyla is composed by 24 species endemic to México. Despite the large number of phylogenetic studies focusing on the family Hylidae, the relationships among the species of Sarcohyla are still poorly known, and the scarce numbers of specimens and tissue samples available for some of the species has hampered an appropriate phylogenetic analysis. We present the most comprehensive molecular phylogenetic study of Sarcohyla to date. We included 17 species of the genus Sarcohyla using data from two mitochondrial (ND1 and 12S) and three nuclear genes (Rag-1, Rhod, and POMc). We performed phylogenetic analyses using Bayesian inference, and the absence of conflicts with strong support between the separate gene trees indicates that incomplete lineage sorting and/or introgressive hybridization are negligible. A coalescent-based species-tree analysis of the four independent loci (three nuclear genes + mtDNA) mostly supports the same species-level relationships as the analysis of the concatenated data. By including new samples from additional species and localities, we find that: (1) the widely distributed species S. bistincta is a complex of at least three species, (2) another undescribed species exists in the group, (3) the species S. ephemera is not valid and it corresponds to a junior synonym of S. calthula. In addition, we conducted marginal likelihood estimation and used Bayes factors to test alternative species delimitation models for S. bistincta, the most widespread nominal species in the group. Our findings support three independent lineages of S. bistincta group, which are paraphyletic with respect to S. pentheter and S. calthula. 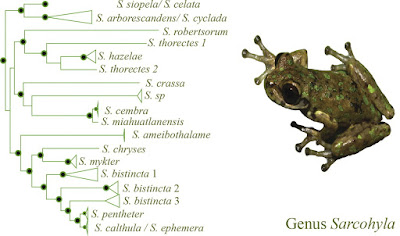 Our analysis revealed several taxonomic problems in Sarcohyla. Of the 17 species included in the analysis, three species may represent junior synonyms of other taxa (S. arborescandens, S. ephemera, and S. miahuatlanensis), and another two appear to represent multiple species (S. bistincta and S. thorectes). These problems may be explained, at least in part, by the absence of morphological autapomorphies in many species of Sarcohyla (which can therefore only be distinguished by unique combinations of traits), and to the scarcity of informative characters and high levels of homoplasy in the group (Duellman, 2001). Although external morphology usually is the first evidence for species recognition, molecular evidence and implementation of modern species delimitation methods based on coalescence theory are needed to identify/corroborate species (i.e., Grummer et al., 2014). Accurate species delimitation and phylogeny reconstruction in Sarcohyla is important to infer the historical biogeography of the highlands of Mexico and specially to develop accurate conservation plans for this group of frogs. For instance, underestimation of species diversity can impact the selection of the areas that will be conserved. Further fieldwork is needed to obtain the samples for a complete, fully resolved, well-supported phylogeny for the genus.