ABSTRACT
Many agamid lizards are known to show sexual dimorphism in body shape, colour and ornamentation or a combination of these traits. Adult males of Salea horsfieldii have a discontinuous dorsal crest at the nuchal region, which is a sexually dimorphic character. However, there is no information about the age or size at which this dimorphic ornamentation develops and if the species exhibits sexual shape dimorphism (SShD). The authors studied the morphology of S. horsfieldii and found that its ornamentation is an ontogenetically stable character present in all males, including juveniles. Seven morphological characters were measured to determine if they exhibited SShD at adult and juvenile stages. Analysis of covariance was used to identify differences in morphology between sexes. The results show that only adults exhibited SShD, but not juveniles. Adult males had larger head and foot lengths in comparison to females of the same size. Larger head length in adult males is a sexual fitness trait, which increases bite-force during intra-sexual combats. Although the presence of sexually dimorphic ornamentation right from the juvenile stage is rare in agamids, S. horsfieldii is an exception . The role of sexually dimorphic ornamentation at juvenile stages remains unknown and requires further investigation. 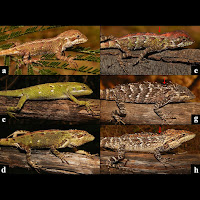