Abstract
Pempheris familia sp. nov. is described on the basis of two specimens collected from the Ogasawara Islands, Japan. The new species is most similar to Pempheris japonica Döderlein in Steindachner and Döderlein 1883, endemic to Japanese and Korean waters, in having adherent scales with strong ctenii on the lateral and ventral surfaces of the body, each scale expanded basally and distally due to central narrowing, the abdomen with a U-shaped cross-sectional outline, a large ventral fenestra between the coracoid and cleithrum, 10 dorsal-fin soft rays and 35 or 36 anal-fin soft rays. However, Pempheris familia can be distinguished from P. japonica by the following combination of characters: 84–88 pored lateral-line scales; 14 or 15 scale rows above the lateral line; 50–55 predorsal scales; 26 circumpeduncular scales; and a distinct blackish blotch on the pectoral-fin base. Pempheris familia appears to be endemic to the Ogasawara Islands.

Etymology. The specific name of the new species, familia, means “family” in Greek. The Ogasawara Islands include ca. 30 islands, many of them having been given family-like names; for example, Chichi-jima = father island, Haha-jima = mother island, Ane-jima = older sister island. Ototo-jima, where the type specimens were collected, and Ani-jima, where the underwater photographs were taken, refer to younger and older brothers, respectively. 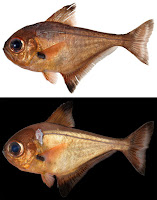