Brachycephalus is a frog genus endemic to the Brazilian Atlantic Forest and characterized by the bright yellow-orange aposematic colors and the high degree of miniaturization. Herein, we describe a new species of Brachycephalus from Serra do Brigadeiro, Municipality of Ervália, Minas Gerais State, southeastern Brazil. Specimens were collected at high altitudes (i.e., 1266–1498 m above sea level) amidst the leaf litter. The new species is characterized by the presence of black connective tissue covering all dorsal muscles, body completely yellow-orange in life, presence of skull and post-cranial plates, large size (SVL of adults: 14.8–18.5 mm), bufoniform body, absence of metacarpal and metatarsal tubercles, and presence of harmonics in its advertisement call.

Etymology. The epithet "darkside" is a noun in apposition, derivative of the English language. It refers to the dark side of the body of Brachycephalus darkside sp. nov., which corresponds to the dark tissue surrounding the dorsal musculature, creating a dark background to the bright yellow-orange dorsum (Fig. 4). It is also a reference to the album "The Dark Side of the Moon" by the British rock band Pink Floyd.

Natural history. Specimens of Brachycephalus sp. nov. were found amidst leaf litter of “Trilha do Cruzeiro”, at the habitat Floresta Estacional Semidecidual Montana, between 1266 and 1498 m a.s.l. We observed active individuals from October to December, between 12h and 19h. Males were found calling exposed over leafs or beneath them, and females walking through the leaf litter. During the dry months (from July until September), individuals of Brachycephalus sp. nov. were found hidden deep into the layers of leaf litter, buried and within roots underground (Fig. 5). The new species is abundant in the area where it occur and reproduce syntopicaly with species of the genus Ischnocnema.

Distribution. Brachycephalus sp. nov. is known from municipalities of Ervália and Miradouro, both at Serra do Brigadeiro, north portion of Mantiqueira mountain range, Minas Gerais State, southeastern Brazil (Fig. 6). Considering the distances between locations, vegetation and altitude range (1266–1498 m a.s.l.), it is likely that this new species can be found in more locations within the Serra do Brigadeiro mountain range. 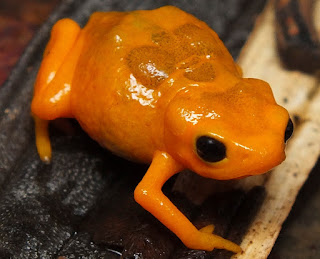