[Ichthyology • 2017] The Species of Hemiancistrus (Siluriformes: Loricariidae) from Ecuador

At the Fish Collection of the Instituto de Ciencias Biológicas, Escuela Politécnica Nacional, Quito, three species traditionally grouped in the genus Hemiancistrus were identified: H. annectens (Regan 1904), H. landoni Eigenmann 1916, and a new species described here. The new species inhabits exclusively in the Esmeraldas River Basin, Pacific slope, northwestern Ecuador. It is easily recognized by the completely naked abdomen, with rounded, dark spots, and a different color pattern on the dorsal and caudal fins. A comparative analysis of bones related to the opercular mobility, shows important differences between H. annectens, H. landoni, and the new species, suggesting that H. annectens does not belong to the genus Hemiancistrus or the Ancistrini group. According to the characteristics observed in these bones, H. annectens shows greater similarity to those reported in species of the Hypostomini group, supporting its inclusion in this group, but placing it in the genus Hypostomus requires further analysis. On the other hand, the conditions observed on the bones of Hemiancistrus landoni and the new species suggest that both are inside of the Ancistrini group. The new species is placed in the genus Hemiancistrus tentatively, pending future analysis. 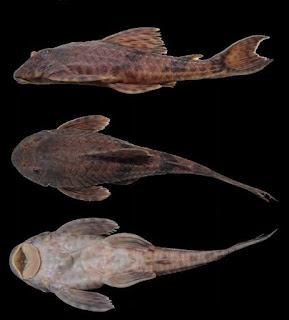 Geographical distribution. The specimens were caught in the Esmeraldas River Basin, Provinces of Esmeraldas and Pichincha (Fig. 5).

Etymology. The name of the species is taken from the Latin word furtivus meaning: attempting to pass unnoticed or hidden, and alludes to the fact that the species was not detected before despite being in the Ecuadorian Pacific region, one of the best known ichthyologically. An adjective.