[Herpetology • 2017] Desmognathus valentinei • A New Species of Dusky Salamander (Plethodontidae: Desmognathus) from the Eastern Gulf Coastal Plain of the United States and A Redescription of D. auriculatus

The Coastal Plain of the southeastern U. S. is one of the planet’s top biodiversity hotspots and yet many taxa have not been adequately studied. The plethodontid salamander, Desmognathus auriculatus, was originally thought to occur from east Texas to Virginia, a range spanning dozens of interfluves and large river systems. Beamer and Lamb (2008) found five independent mitochondrial lineages of what has been called D. auriculatus in the Atlantic Coastal Plain, but did not examine the extensive distribution of D. auriculatus in the Gulf Coastal Plain. We present morphological and molecular genetic data distinguishing two evolutionarily independent and distantly related lineages that are currently subsumed under the taxon D. auriculatus in the eastern Gulf Coastal Plain. We describe one of these as a new species, Desmognathus valentinei sp. nov., and assign the second one to D. auriculatus which we formally redescribe. 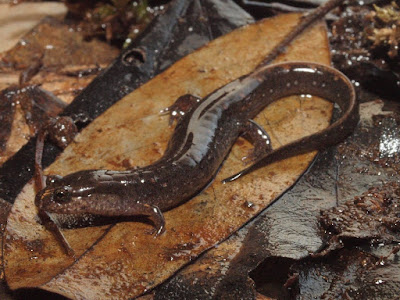 Etymology. Named for Barry D. Valentine, who originally recognized the distinctiveness of this new species in Mississippi from shaded, small-order stream populations of other Coastal Plain species of Desmognathus, and color differences with topotypic D. auriculatus (Valentine 1963).

Etymology. Named for the broad, reddish-brown stripe from the lower eyelid to the top of the posterior part of the upper lip which is a pleisiomorphic character for species of Desmognathus. Holbrook (1838) coined the specific epithet in reference to the "reddish-brown spot near the ear" and "an oblong reddish-brown spot behind the ear" (from the Latin words auricula = little ear and the ending -atus = provided with or having the nature of) in what is otherwise a generally black salamander. Of course, salamanders do not have ears, per se. 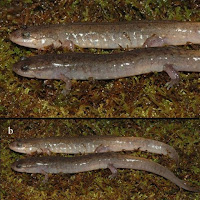 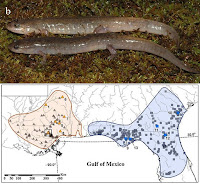