ABSTRACT
Scomber indicus, a new species of mackerel is described based on the specimens collected from the eastern Arabian Sea. The species is differentiated from its nearest congener Scomber australasicus, in having 29-32 gill rakers on lower limb of first gill arch, posteriormost part of hypohyal blunt, with presence of a pit between the hypohyal and the ceratohyal and also in having a posteriorly directed haemal spine which is deeply curved in the basal region. Genetic differentiation and divergence between the newly described species and the 4 valid species of the genus Scomber viz., S. scombrus, S. japonicus, S. australasicus and S. colias were compared using cytochrome c oxidase 1 and cytochrome b gene sequences. The new species was found closest to S. colias followed by S. japonicus with Kimura 2 parameter (K2P) values of 1.4 and 1.8% respectively. In the phylogenetic tree, sequences of Scomber indicus sp. nov. formed a distinct well separated clade with significant bootstrap values as compared to the sequences of S. scombrus, S. japonicus, S. australasicus and S. colias indicating their distinctiveness and separate species status. 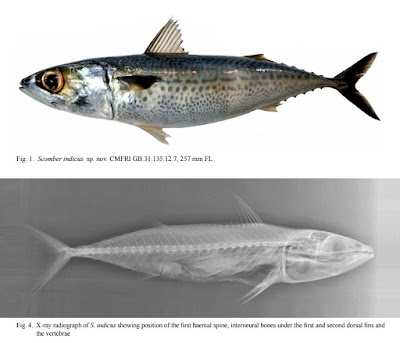 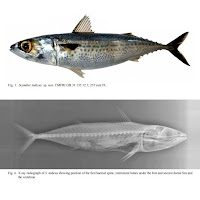 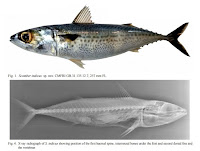