Pycnandra longiflora (Sapotaceae) belongs to the largest endemic genus in New Caledonia. It is only known from the type collection made in 1861–67 at the obscure locality “Gatope”. Relocation of this species has been of high priority for more than a decade, but without success. Pycnandra longiflora was therefore recently declared extinct. However, a population was recently discovered near a mining site at Onajiele, in the Ouazangou-Taom massif, and it is revealed that P. longiflora has the most spectacular flowers in the entire genus, being large and bicoloured in red and yellow. A thorough description is here outlined and we propose a preliminary IUCN status as Critically Endangered. 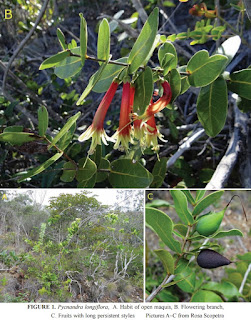 Conclusion:
Pycnandra longiflora is not extinct and grows less than 600 metres from the main road (RT1) of “Grande-Terre”, close to an accessible track (Figure 2). This is a very important locality of native vegetation as a new species of Myrtaceae, Eugenia plurinervia Snow, Munzinger & Callm. (2016: 212), also occurs here. Several other rare species such as Planchonella minutiflora Munzinger & Swenson (2009: 182), Croton cordatulus Airy Shaw (1978: 387), Euodia tietaensis (Guillaumin) T.G. Hartley (2001: 56) are also present, which clearly indicates that the place has high conservation value. The rediscovery of this P. longiflora supports continuing botanical surveys in New Caledonia, to provide sound data for conservation assessments.

What's in the Box? A Long-Lost Species
blogs.scientificamerican.com/extinction-countdown/box-lost-species