Titanosaurian dinosaurs include some of the largest land-living animals that ever existed, and most were discovered in Cretaceous deposits of Argentina. Here we describe the first Brazilian gigantic titanosaur, Austroposeidon magnificus gen. et sp. nov., from the Late Cretaceous Presidente Prudente Formation (Bauru Group, Paraná Basin), São Paulo State, southeast Brazil. The size of this animal is estimated around 25 meters. It consists of a partial vertebral column composed by the last two cervical and the first dorsal vertebrae, all fairly complete and incomplete portions of at least one sacral and seven dorsal elements. The new species displays four autapomorphies: robust and tall centropostzygapophyseal laminae (cpol) in the last cervical vertebrae; last cervical vertebra bearing the posterior centrodiapophyseal lamina (pcdl) bifurcated; first dorsal vertebra with the anterior and posterior centrodiapophyseal laminae (acdl/pcdl) curved ventrolaterally, and the diapophysis reaching the dorsal margin of the centrum; posterior dorsal vertebra bearing forked spinoprezygapophyseal laminae (sprl). The phylogenetic analysis presented here reveals that Austroposeidon magnificus is the sister group of the Lognkosauria. CT scans reveal some new osteological internal features in the cervical vertebrae such as the intercalation of dense growth rings with camellae, reported for the first time in sauropods. The new taxon further shows that giant titanosaurs were also present in Brazil during the Late Cretaceous and provides new information about the evolution and internal osteological structures in the vertebrae of the Titanosauria clade. 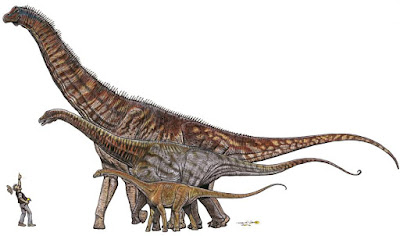 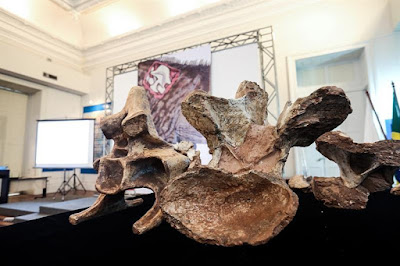 Etymology: “Austro”, meaning “Southern” in allusion to South America; and “Poseidon”, in reference to the Greek God responsible for earthquakes.

Etimology: The adjective “magnificus” (from the Latin), means “great, elevated, noble” in allusion to the large size of the specimen. 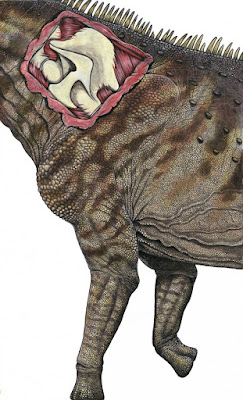 Horizon and locality: According to Campos and Castro [28], the material was found at the outskirts of the Presidente Prudente City, southwestern São Paulo State. According to the catalog of the Museu de Ciências da Terra (MCT—Museum of the Earth Sciences) the specimen was found at the Raposo Tavares road (BR-374), close to the Assis Chateaubriand Road (SP-425). The deposits of this region consist of sandstones and mudstones, and are referred to the Presidente Prudente Formation [29], which is considered Campanian-Maastrichtian in age [32]. One of us (FMS) tried to relocate the exact site from where this specimen was collected, but the area is nowadays urbanized. 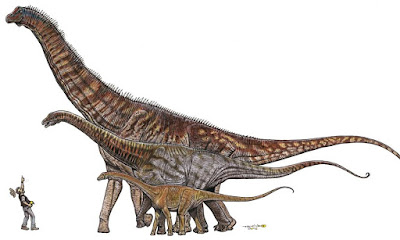 Conclusions
The description of this new species, Austroposeidon magnificus, increases our knowledge of Brazilian titanosaurs, particularly the giant ones, which have not been reported previously in this country. Despite the fragmentary condition of the new species, a phylogenetic analysis shows that Austroposeidon magnificus is the sister group of Lognkosauria, a clade that comprises other giant titanosaurs. CT scan analysis reveals some new information about internal anatomic features of large titanosaurs, including potential growth patterns. Some of those internal structures are here observed for the first time and reinforce the importance of the CT scan studies in those giant dinosaurs. 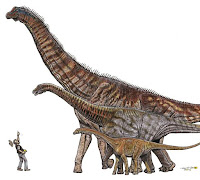 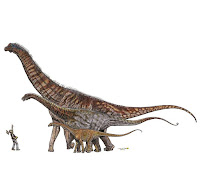