A new species of Hanguana (Hanguanaceae), Hanguana thailandica, is described and illustrated from Trang province, Peninsular Thailand. This is the second Hanguana species recorded in Thailand, along with the widespread helophytic H. malayana. The species is morphologically similar to Hanguana exultans and H. nitens found in swamp forests habitats in southern Peninsular Malaysia and Singapore. The conservation status of this species is accessed as Endangered according to the IUCN Red List Category and Criteria.

Diagnosis:— The new species is similar to H. exultans, but differs by having larger inflorescences up to 80 cm (not up to 60 cm) and the inflorescence branches arranged in a horizontal angle (not ascending), and stigmatic lobes ca. 1.5 mm (not 1.2 mm) long, very narrowly lanceolate (not rounded) in shape and raised from the gynoecium (not adpressed to it).

Ecology, distribution and conservation:— Evergreen primary peat swamp forest in the Peninsular Botanical Garden in Thung Khai. 80-90% canopy cover. The soil is made up of peat (i.e. >65% organic matter by weight) with a thick leaf litter layer. The water level was a few centimeters below surface. The plants were scattered in different parts of the peat swamp where they were locally common.

This species is only known from the Peninsular Botanical Garden, where is under protection. The lack of botanical surveys in swamps of the Peninsular Thailand region makes it difficult to assign the IUCN conservation status (2012). We estimate the number of individuals to be about 100. Based on the currently known range, the extent of occurrence (EOO) of this species is less than 5 sq.km, with only one known locality, which is under protection as it is within the Peninsular Botanical Garden. The conservation status of the species is assessed to be Endangered (EN D) based on the very small, restricted population of less than 250 individuals.

The species is currently only known from peat swamp forest habitats which are understood and still undergoing rapid deforestation (Posa et al. 2010, Wijedasa et al. 2012, Chisholm et al. 2016). More botanical work in this habitat is needed to help understand and conserve the unique flora in these habitats.

Etymology:— The specific epithet ‘thailandica’ is derived from Thailand, where this species was collected and it is the first new species of Hanguana found in Thailand. 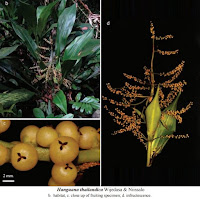