Significance
The paper reports a remarkable arthropod from the Silurian Herefordshire Lagerstätte of England. The fossil reveals a unique association in an early Paleozoic arthropod involving tethering of 10 tiny individuals each by a single thread to the tergites so that their appearance is reminiscent of kites. The evidence suggests that these are juveniles and that the specimen records a unique brooding strategy. This is part of a diversity of complex brooding behaviors in early arthropods heralding the variety that occurs today. The possibility that the small individuals represent a different arthropod, possibly parasitic, which colonized the larger individual, seems less likely.

Abstract
The ∼430-My-old Herefordshire, United Kingdom, Lagerstätte has yielded a diversity of remarkably preserved invertebrates, many of which provide fundamental insights into the evolutionary history and ecology of particular taxa. Here we report a new arthropod with 10 tiny arthropods tethered to its tergites by long individual threads. The head of the host, which is covered by a shield that projects anteriorly, bears a long stout uniramous antenna and a chelate limb followed by two biramous appendages. The trunk comprises 11 segments, all bearing limbs and covered by tergites with long slender lateral spines. A short telson bears long parallel cerci. Our phylogenetic analysis resolves the new arthropod as a stem-group mandibulate. The evidence suggests that the tethered individuals are juveniles and the association represents a complex brooding behavior. Alternative possibilities—that the tethered individuals represent a different epizoic or parasitic arthropod—appear less likely. 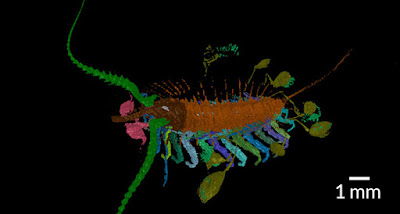 Aquilonifer spinosus is a new genus and species of arthropod from the Herefordshire Lagerstätte, a late Wenlock (mid-Silurian) volcaniclastic deposit in Herefordshire, United Kingdom. It is preserved, as are the other fossils from this Lagerstätte, in three dimensions as a calcitic void fill in a carbonate concretion. The name of the new taxon refers to the fancied resemblance between the tethered individuals and kites, and echoes the title of the 2003 novel The Kite Runner by Khaled Hosseini (aquila, eagle or kite; -fer, suffix meaning carry; thus aquilonifer, kite bearer; spinosus, spiny, referring to the long lateral spines on the tergites). The material is a single specimen, the holotype OUMNH C.29695, registered at the Oxford University Museum of Natural History (Fig. 1 and Movie S1).

Diagnosis. Features include a head shield with rostrum-like anterior projection, large uniramous antenna, chelate limb, and two other biramous appendages in the head, the last similar to those of the trunk; an elongated trunk with long, slender lateral spines on the 11 tergites, with all trunk somites bearing limbs of which all but the last are biramous; and a short telson and long cerci. 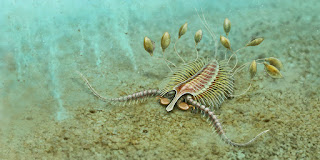