Abstract
A new species of cat snake, related to Boiga beddomei (Wall, 1909), is described from the dry forests of eastern Peninsular India. It occupies a large geographic range from Berhampore (type locality), near the River Mahanadi in the northeast to Kaigal near the southern Eastern Ghats in the southwest. The new species is diagnosed by having the following combination of characters: 19 dorsal scale rows at midbody, a high number of ventral scales for the genus Boiga (248–259), a yellowish-green dorsal colouration with numerous faint black bands, an uniform, unpatterned yellow-coloured venter and a relatively short tail (0.180–0.200 of the total length). 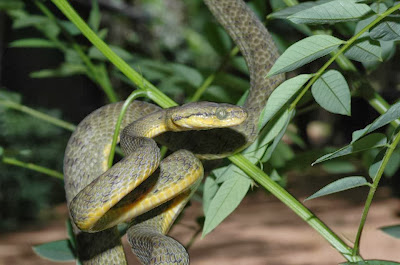