Abstract
Vatica najibiana Ummul-Nazrah (Dipterocarpaceae), from the Relai Forest Reserve, Gua Musang, Kelantan and Gua Tanggang, Merapoh, Pahang, is described and illustrated. This species is Endangered and known from small populations restricted to two isolated karst limestone hills. The type locality, Relai Forest Reserve limestone, is currently under threat from encroaching oil palm plantations and ongoing logging, which, if it continues, will threaten the Kelantan population with extinction. The morphology of V. najibiana and the similar V. odorata subsp. odorata and V. harmandiana is compared.

Diagnosis: Amongst the Vaticas with a half inferior ovary, it groups with Vatica harmandiana and V. odorata (Griff.) Symington subsp. odorata. Vatica harmandiana occurs on limestone hills and rocks but is different in having leaves that are elliptic-lanceolate, leaf base cuneate and nut diameter 7–10 mm as oppose to the obovate-elliptic leaf, leaf base cordate-subcordate and nut diameter of 5–6 mm in V. najibiana. Vatica odorata subsp. odorata is closely similar to the new species but can be separated by its elliptic-oblong leaf, leaf base obtuse, leaf apex acuminate, nut diameter 8–9 mm and occurrence in lowland and hill forest (Table 1).

Etymology: This species is named in honour of the Prime Minister of Malaysia, Dato’ Sri Mohd Najib bin Tun Abdul Razak, for his strong interest in nature conservation and protection of the environment.

Habitat: It is an emergent tree on the rugged summit of karst limestone at 178–520 m altitude growing in rock fissures with a thick layer of leaf litter. 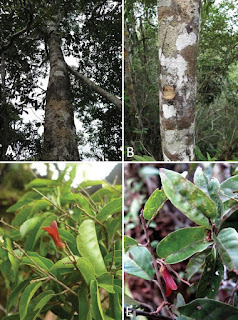