We describe a new frog species of the genus Guibemantis, subgenus Pandanusicola, from Marojejy National Park in northeastern Madagascar. Guibemantis milingilingy, the new species, exhibits high genetic divergence from all other described species of Guibemantis based on DNA sequences of a fragment of the mitochondrial 16S rRNA gene. This new species inhabits Pandanus plants like the majority of other members of this subgenus, but is found at much higher elevations (2026 m a.s.l.). It differs from its closest relative, G. punctatus, by the lack of speckled or spotted dorsal patterns and by the presence of a distinctly dark tympanum. As a high-elevation species, it is likely to be a species sensitive to climate change, similar to other montane endemics in Madagascar.

Etymology.— The specific epithet is a Malagasy word meaning ‘‘being in an uncomfortable position,’’ in reference to the precariousness of capturing specimens of this species, due to the uneven and steep substrate on which their Pandanus plants grow, which caused one of the authors to fall into such a plant with great gusto. The name is used as an invariable noun in apposition to the genus name. 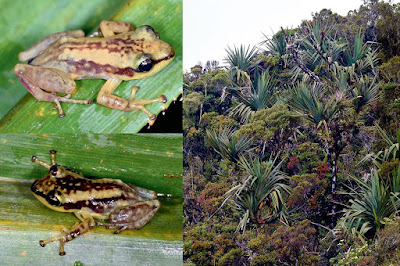 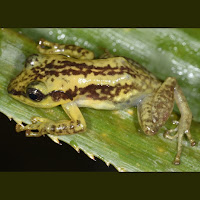 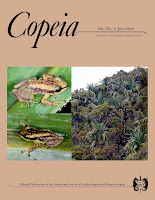