[Paleontology • 2018] Magyarosuchus fitosi • A New Large-bodied Thalattosuchian Crocodyliform from the Lower Jurassic (Toarcian) of Hungary, with Further Evidence of the Mosaic Acquisition of Marine Adaptations in Metriorhynchoidea

Based on associated and three-dimensionally preserved cranial and postcranial remains, a new thalattosuchian crocodyliform, Magyarosuchus fitosi gen. et sp. nov. from the Lower Jurassic (Upper Toarcian) Kisgerecse Marl Formation, Gerecse Mountains, Hungary is described here. Phylogenetic analyses using three different datasets indicate that M. fitosi is the sister taxon of Pelagosaurus typus forming together the basal-most sub-clade of Metriorhynchoidea. With an estimated body length of 4.67–4.83 m M. fitosi is the largest known non-metriorhynchid metriorhynchoid. Besides expanding Early Jurassic thalattosuchian diversity, the new specimen is of great importance since, unlike most contemporaneous estuarine, lagoonal or coastal thalattosuchians, it comes from an ‘ammonitico rosso’ type pelagic deposit of the Mediterranean region of the Tethys. A distal caudal vertebra having an unusually elongate and dorsally projected neural spine implies the presence of at least a rudimentary hypocercal tail fin and a slight ventral displacement of the distal caudal vertebral column in this basal metriorhynchoid. The combination of retaining heavy dorsal and ventral armors and having a slight hypocercal tail is unique, further highlighting the mosaic manner of marine adaptations in Metriorhynchoidea.

Etymology— ‘Hungarian crocodile.’ Magyaro referring to the Hungarian people, and suchus is the Latinized form of the Greek soukhos (σoῦχoς), meaning crocodile.

Etymology—‘Fitos’s Hungarian crocodile.’ The name refers to Attila Fitos, discoverer of the specimen in thanks for his donation of the fossil to science.

Diagnosis— Large-sized (estimated body length: in the range of 4.67–4.83 m) metriorhynchoid thalattosuchian with the following unique combination of characters (proposed autapomorphic characters are indicated by an asterisk (*)): tooth crown carinae development variable, being well-developed apically, beginning to develop mid-crown and absent in the basal region; enamel ornamentation is composed of ridges that differ in arrangement on the labial and lingual surfaces, being more widely spaced on the labial surface than the lingual surface, with the lingual surface having tightly packed apicobasal ridges basally which apically become shorter and discontinuous, and the apical lingual ridges on the mesial and distal margins bend towards the carinae (but do not contact them)*; abrupt change in centrum shape of the distal caudal vertebrae, with strong mediolateral compression (i.e. distal vertebrae are clearly heteromorphic); dorsal osteoderms have irregularly shaped pits (including circular, ellipsoid, bean-shaped, triangular and quadrangular shapes), with an extreme variation in size (from small to very large), with elongate pits present on the ventrolateral surface running from the keel to the lateral margin*; dorsal osteoderms have an anterolateral process that is ‘indistinct,’ no longer being distinctly ‘peg-like,’ as their lateral margin is contiguous with that of the osteoderm ventrolateral surface*. 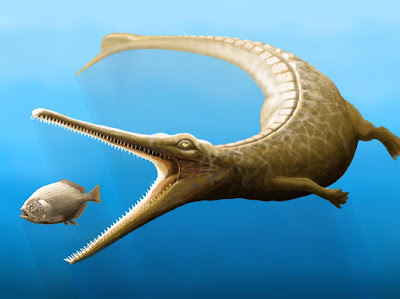 Conclusion:
Here, we describe a new crocodylomorph taxon, Magyarosuchus fitosi gen. et sp. nov., based on a new skeleton from the Gerecse mountains of Hungary. Despite being incomplete and lacking the cranium, we demonstrate that this late Lower Jurassic taxon shows remarkable similarities with the iconic Lower Jurassic genus Pelagosaurus. Magyarosuchus and Pelagosaurus are found to be sister taxa in all three phylogenetic analyses undertaken herein, although the two characters uniting this arrangement are not known from other basal metriorhynchoids (due to poor preservation of taxa such as Teleidosaurus, Eoneustes and Zoneait). Therefore, we cannot be certain that the sister relationship between Magyarosuchus and Pelagosaurus is natural, or due to incomplete information. Regardless, both are found to be basal metriorhynchoids, near the start of the radiation that yielded dolphin-like crocodyliforms. Interestingly, M. fitosi is the oldest known thalattosuchian discovered from an ‘ammonitico rosso’ type pelagic deposit (rather than the usual estuarine, lagoonal or coastal ecosystems Lower Jurassic thalattosuchians are discovered from). The pelagic depositional environment and neritic associated cephalopod fauna are both consistent with the inferred open-marine adaptation of M. fitosi, namely a mediolaterally compressed distal caudal vertebra with an unusually elongated and dorsally projected neural spine which suggests the presence of a distal tail structure that could have been a hypocercal fin, or a precursor to it. The unique combination of retaining heavy dorsal and ventral armor, while having a slight hypocercal tail, on the other hand, highlights the mosaic manner of marine adaptations in Metriorhynchoidea. Furthermore, it underscores how little is still known about the timing and tempo of metriorhynchoid pelagic adaptations and their early radiation.