[Herpetology • 2018] Atractus atlas • A Giant on the Ground: Another Large-bodied Atractus (Serpentes: Colubridae: Dipsadinae) from Ecuadorian Andes, with Comments on the Dietary Specializations of the Goo-eaters Snakes

ABSTRACT
Body-size is significantly correlated with the number of vertebrae (pleomerism) in multiple vertebrate lineages, indicating that somitogenesis process is an important factor dictating evolutionary change associated to phyletic allometry and, consequently, species fitness and diversification. However, the role of the evolution of extreme body sizes (dwarfism and gigantism) remains elusive in snakes, mainly with respect to postnatal ontogeny in dietary preferences associated with evolution of gigantism in many lineages. We described herein a new species in the highly diversified and species-rich genus Atractus on the basis of four specimens from the southeastern slopes of the Ecuadorian Andes. The new species is morphologically similar and apparently closely related to two other allopatric giant congeners (A. gigas and A. touzeti), from which it can be distinguished by their distinct dorsal and ventral coloration, the number of supralabial and infralabial scales, the number of maxillary teeth, and relative width of the head. In addition, we discuss on the ontogenetic trajectories hypotheses and dietary specializations related to evolution of gigantism in the goo-eaters genus Atractus. 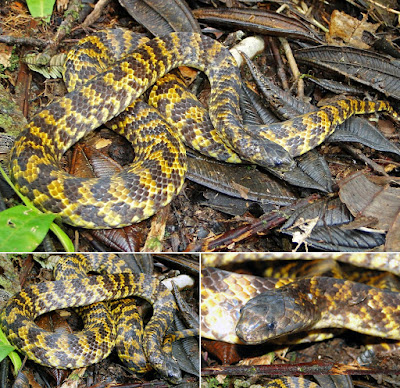 Etymology: The Latinized specific epithet “atlas” (Άτλας) represents a Titan from the Greek mythology that was condemned by Zeus to support the entire world (or the heaven in some variations of the ancient legend) forever on their shoulders as punishment for attacking the Mount Olympus. The legend is also related to excess of obligations and duties or the huge efforts to complete certain difficult tasks. We employed herein this name alluding to the large body-size of the new species (it is among the five species of the genus that reach the largest body-size; see Passos et al. 2010a), as well as in reference to the tremendous endeavor for attaining the real diversity of Atractus, not only for discovering undescribed species, but also for recognition of a lot of synonymies in the old and even recent literature, or frequent species misidentifications in collections and public repositories (see Passos et al. 2017). We propose the vernacular name of Atractus atlas to be ‘Atlas Ground Snake’ in English and ‘Culebra Tierrera del Atlas’ in Spanish.

Distribution and natural history: Southeastern portions of Ecuadorian Andes, from Zúñac in the province of Morona Santiago, south to Paquisha, Guayzimi Alto and Reserva Biológica Cerro Plateado in the province of Zamora-Chinchipe. Atractus atlas occurs in Mountain rainforest at 1800–2100 m asl (Fig. 5).
The holotype (MEPN 14203) was found resting under leaf litter locally called “bamba” at 10:46 am during thermoregulatory activity with direct incidence of sunlight. The vegetation covering the type-locality is composed by a type of cloud forest denominated “Western Mountain Forest”. This forest formation usually remains cloudy in the early hours of the morning, afternoons, or even all day long, depending on the season, and is comprised by trees of 15–20 m covered with bryophytes, bromeliads and abundant moss. The plant layer sits on a plateau of sandstone, and grows on a substrate of very acid sand soil poor in nutrients.
The paratype (DHMECN 12361) is a roadkill found in the early hours of the morning dead on the Macas–Riobamba road. The vegetal formation in this locality is characterized as a premontane evergreen forest of the southern portion of Cordillera Oriental of the Ecuadorian Andes (Ministerio del Ambiente 2013), in which the trees have abundant orchids and bromeliads and the tree canopy reaches 30 m where the dominant trees species are romerillo (Prumnopitys montana), cedro (Cedrela montana) and royal palm (Dictyocaryum lamarckianum).