Summary
Camouflage and mimicry are staples among predator-prey interactions, and evolutionary novelties in behavior, anatomy, and physiology that permit such mimesis are rife throughout the biological world. These specializations allow for prey to better evade capture or permit predators to more easily approach their prey, or in some cases, the mimesis can serve both purposes. Despite the importance of mimesis and camouflage in predator-avoidance or hunting strategies, the long-term history of these traits is often obscured by an insufficient fossil record. Here, we report the discovery of Upper Cretaceous (approximately 100 million years old) green lacewing larvae (Chrysopoidea), preserved in amber from northern Myanmar, anatomically modified to mimic coeval liverworts. Chrysopidae are a diverse lineage of lacewings whose larvae usually camouflage themselves with a uniquely constructed packet of exogenous debris, conveying greater stealth upon them as they hunt prey such as aphids as well as evade their own predators. However, no lacewing larvae today mimic their surroundings. While the anatomy of Phyllochrysa huangi gen. et sp. nov. allowed it to avoid detection, the lack of setae or other anatomical elements for entangling debris as camouflage means its sole defense was its mimicry, and it could have been a stealthy hunter like living and other fossil Chrysopoidea or been an ambush predator aided by its disguise. The present fossils demonstrate a hitherto unknown life-history strategy among these “wolf in sheep’s clothing” predators, one that apparently evolved from a camouflaging ancestor but did not persist within the lineage. 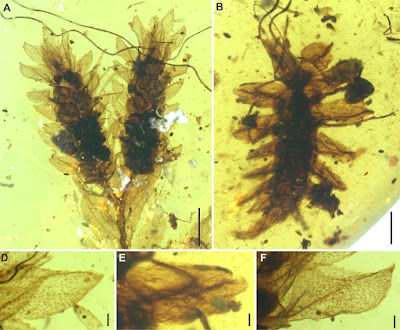 Etymology The genus-group name is a combination of phyllon (Greek, meaning, ‘‘leaf’’) and chrysos (Greek, meaning, ‘‘gold’’ and a common suffix for chrysopoid genera). The specific epithet honors Yiren Huang, who kindly donated the holotype for our study.