MSNM V345 is a partial skeleton of the North American hadrosaur species Gryposaurus notabilis, Lambe 1914, dis-covered in 1922 in the Dinosaur Park Formation of Dinosaur Provincial Park, Alberta, Canada. It was shipped in several crates to the Museo di Storia Naturale di Milano (MSNM), Italy, where it arrived in October 1958. Careless transportation during its long journey to Milan meant that the skeleton arrived extremely damaged and required heavy restoration work by MSNM staff.

A preliminary study of the specimen was conducted by Vittorio Vialli in 1960 while part of it was still under preparation. That study was followed by a more detailed, although still partial, osteological description by Giovanni Pinna in 1979. On the centennial of the species’ discovery, we decided to examine the specimen in even greater detail in order to improve knowledge on the dinosaur’s skeletal anatomy and help clarify the taxonomy of the genus.

Here, we redescribe the dinosaur’s osteology, focusing on unpublished elements, such as metapodials, phalanges, sacral vertebrae, and some caudal vertebrae, recently discovered to be located at the MSNM. Isolated appendicular elements found at the same quarry and tentatively referable to other individuals of the same taxon or to other dinosaur species are also briefly mentioned. Histological analysis of a core obtained from the femur revealed that it was made of fibrolamellar bone with a high number of Haversian systems. The presence of an external fundamental system indicates that the individual was fully adult at the moment of death.

Of note, the skeletal remains present with traces of at least four pathological conditions: a cavity in the predentary is speculated to be the result of osteomyelitis; the fifth dorsal vertebra is fused to the left rib through a overgrowth of bone, and is interpreted as osteosclerosis subsequent to a fracture; the neural spine of the 26th caudal vertebra is fractured and healed, and the centrum has a strap of bone growing up to the side of the preceding centrum, explainable as idiopathic skeletal hyperostosis. 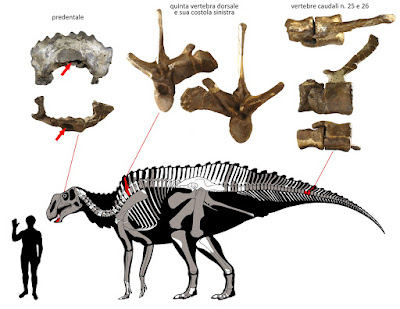 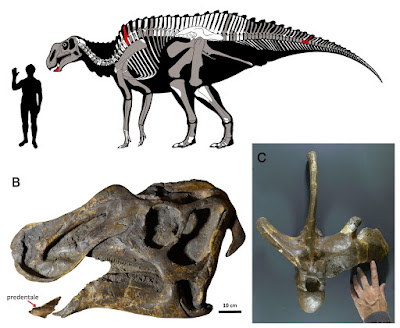 CONCLUSIONS:
Specimen MSNM V345 is a large, robust individual of Gryposaurus notabilis. Our re-examination of all its bones housed at the MSNM has allowed us to revise previous estimates on the completeness of the skeleton, which now reaches 32.68% (39.54% when taking into account the hid-den cranial bones, and 48.37% when duplicating existing counterlateral elements). The skull of MSNM V345 is one of the largest known for Gryposaurus. Our recalculation of the size of the skeleton, which takes into account the spaces occupied in vivo by intervertebral and epiphyseal cartilage, gives us an overall length of 800 cm in a neutral pose and a height at the hip of 315 cm. The osteology of the individual shows features related to other G. notabilis specimens: a dorsoventrally narrow orbit, infratemporal fenestra twice higher than wide, a well-developed nasal arch, wide and irregular ventral embayment of the jugal, a long and narrow quadratojugal, a predentary with nine large denticles placed asymmetrically, and a tall neural spine on the second caudal vertebra.

The advanced ontogenetic age of the skeleton – which likely belonged to a senile individual – is corroborated by palaeohistological analysis showing the presence of EFSs and several generations of Haversian systems in a femur, indicative of a specimen that was fully adult at time of death.

Finally, this individual was affected by several skele-tal disorders. The predentary bears a large, central fora-men located in the caudomedian plane of the bone. The histology of this anomaly reveals the presence of large resorption cavities and a randomised pattern of osteocytes, indicators of osteomyelitis. The transverse process of dorsal vertebra 5 is fused with the proximal region of the rib, affected by an abnormal overgrowth of bone tissue. CT-scanning of this vertebra indicates hyper-trophied osteosclerosis likely consequent to traumatic fracture. The caudal vertebrae 25 and 26 had their cen-tra fused together, with that of vertebra 25 broken into two halves. CT-scanning indicates that this condition might represent skeletal hyperostosis or haemangioma.

Gryposaurus notabilis is one of the first hadrosaurs depicted for the general audience. Nevertheless, it is not as popular as other duck-billed dinosaurs, such as Edmontosaurus, Parasaurolophus, or Corythosaurus. We have proposed new skeletal and in vivo restorations using the anatomical data obtained from our analysis. 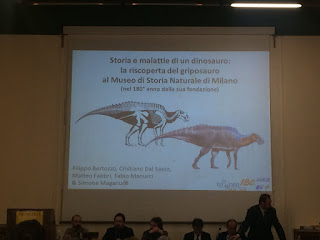