Abstract
The fauna of whip spiders (Amblypygi) in Western Africa is poorly known but probably diverse. Here, I describe the new species Charinus kakum sp. n. based on female morphology, and accompanied by DNA sequence data. The species is small and differs from other African species of Charinus in the low number of pseudosegments on leg IV, female genital features, spination patterns of the pedipalp, and small body size. It was collected from wet tropical rainforest in Kakum National Park, Ghana and is only the fourth species of Charinus to be recorded from the highly diverse Western African biodiversity hotspot. With a total body length of not even 6 mm it is also one of the smallest whip spiders in the world. 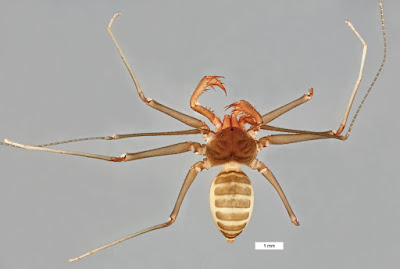 Taxonomic remarks: Weygoldt (2000a) defined Charinus based on the armature of the pedipalp: with three large dorsal spines on the tibia of which the first one is the largest and the others decrease proximally in length; spine 1 sometimes followed distally by one to three spinelets, pedipalp basitarsus with two spines of which the distal spine is largest. Charinus also differs from the closely related Sarax in lacking ventral sac covers (Rahmadi and Kojima 2010). The genus currently includes more than 70 species (Vasconcelos and Ferreira 2017) but is in need of revision (Weygoldt 2000a, b). Nonetheless, the new species aligns well with the current genus diagnosis and is placed here until such revision has been carried out.

Distribution: Only known from the type locality by a single female individual. The wider distribution remains unknown and unfortunately no other specimens could be collected, despite targeted searches in the vicinity of the type locality. 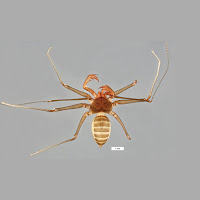