Abstract
Marmosets and tamarins (Cebidae, Callitrichinae) constitute the most species-rich subfamily of New World monkeys and one of the most diverse phenotypically. Despite the profusion of molecular phylogenies of the group, the evolution of phenotypic characters under the rapidly-emerging consensual phylogeny of the subfamily has been little studied, resulting in taxonomic proposals that have limited support from other datasets. We examined the evolution of 18 phenotypic traits (5 continuous and 13 discrete), including pelage, skull, dentition, postcrania, life-history and vocalization variables in a robust molecular phylogeny of marmoset and tamarin monkeys, quantifying their phylogenetic signal and correlations among some of the traits. At the family level, our resulting topology supports owl monkeys (Aotinae) as sister group of Callitrichinae. The topology of the callitrichine tree was congruent with previous studies except for the position of the midas group of Saguinus tamarins, which placement as sister of the bicolor group did not receive significant statistical support in both Maximum Parsimony and Bayesian Inference analyses. Our results showed that the highest value of phylogenetic signal among continuous traits was displayed by the long call character and the lowest was exhibited in the home range, intermediate values were found in characters related to osteology and skull size. Among discrete traits, pelage and osteology had similar phylogenetic signal. Based on genetic, osteological, pelage and vocalization data, we present an updated genus-level taxonomy of Callitrichinae, which recognizes six genera in the subfamily: Callimico, Callithrix, Cebuella, Mico, Leontopithecus and Saguinus. To reflect their phenotypic distinctiveness and to avoid the use of the informal “species group”, we subdivided Saguinus in the subgenera Leontocebus, Saguinus and Tamarinus (revalidated here). 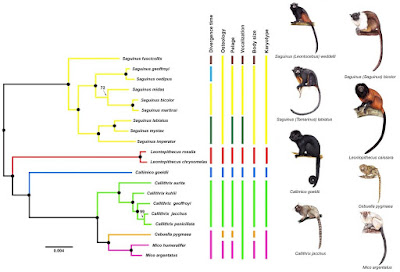 Conclusions
In this study, we demonstrated that vocalization and pelage characters can have a phylogenetic signal that is stronger than or comparable to the traditionally used osteological ones. Our robust phylogeny of callitrichinae shows that the position of the midas group of Saguinus is still unresolved.

This study is the first to offer a classification of Callitrichine that takes into account phylogenetic relationships, morphological, molecular and behavioral characters. As such, we propose that the phenotypic differences among the three clades of Saguinus are better represented in the group’s taxonomy by dividing the genus in three subgenera: Leontocebus, Saguinus and Tamarinus. Like any other taxonomic hypothesis, the one presented here is subject to testing, and future studies including additional characters may offer subsides to further divide the recognized genera or even elevate some of the subgenera to full genera.