ABSTRACT
The avifauna of Rote Island in the Lesser Sundas is not well studied and generally considered to be similar to that of adjacent Timor Island. However, some cases of bird endemism have recently been documented on this island. A population of Myzomela honeyeater is one such example. First observed in October 1990, it has been subsumed with Myzomela dammermani from Sumba Island given its superficially similar appearance. Based on extensive morphological inspection and bioacoustic analysis, we here describe this population as a new taxon to science. Apart from previously overlooked plumage distinctions, the new taxon bioacoustically differs from M. dammermani in the presence or absence of several unique call types and considerable differences across two parameters in shared call types. Considering the importance of bioacoustics in avian species delimitation, we propose that the new Rote Myzomela be considered a distinct species. Given continued habitat conversion across its small range, we propose the International Union for Conservation of Nature and Natural Resources (IUCN) threat status Vulnerable for the species.

Etymology: We are pleased to name this species after Iriana Widodo, the current First Lady of the Republic of Indonesia, to recognise her keen interest in Indonesia’s birdlife and her valuable stewardship and advocacy for Indonesia’s natural environments. 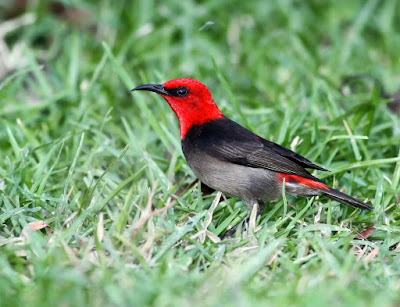 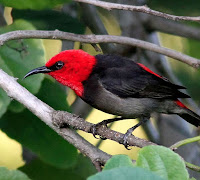 The discovery of Myzomela irianawidodoae — named after Indonesia’s first lady, Iriana Joko Widodo — involved a series of separate field studies between 1990 and 2015 by different groups of researchers, according to a paper published Dec. 31, 2017, in the scientific journal Treubia.