A new small-bodied ornithopod dinosaur, Diluvicursor pickeringi, gen. et sp. nov., is named from the lower Albian of the Eumeralla Formation in southeastern Australia and helps shed new light on the anatomy and diversity of Gondwanan ornithopods. Comprising an almost complete tail and partial lower right hindlimb, the holotype (NMV P221080) was deposited as a carcass or body-part in a log-filled scour near the base of a deep, high-energy river that incised a faunally rich, substantially forested riverine floodplain within the Australian–Antarctic rift graben. The deposit is termed the ‘Eric the Red West Sandstone.’ The holotype, interpreted as an older juvenile ∼1.2 m in total length, appears to have endured antemortem trauma to the pes. A referred, isolated posterior caudal vertebra (NMV P229456) from the holotype locality, suggests D. pickeringi grew to at least 2.3 m in length. D. pickeringi is characterised by 10 potential autapomorphies, among which dorsoventrally low neural arches and transversely broad caudal ribs on the anterior-most caudal vertebrae are a visually defining combination of features. These features suggest D. pickeringi had robust anterior caudal musculature and strong locomotor abilities. Another isolated anterior caudal vertebra (NMV P228342) from the same deposit, suggests that the fossil assemblage hosts at least two ornithopod taxa. D. pickeringi and two stratigraphically younger, indeterminate Eumeralla Formation ornithopods from Dinosaur Cove, NMV P185992/P185993 and NMV P186047, are closely related. However, the tail of D. pickeringi is far shorter than that of NMV P185992/P185993 and its pes more robust than that of NMV P186047. Preliminary cladistic analysis, utilising three existing datasets, failed to resolve D. pickeringi beyond a large polytomy of Ornithopoda. However, qualitative assessment of shared anatomical features suggest that the Eumeralla Formation ornithopods, South American Anabisetia saldiviai and Gasparinisaura cincosaltensis, Afro-Laurasian dryosaurids and possibly Antarctic Morrosaurus antarcticus share a close phylogenetic progenitor. Future phylogenetic analysis with improved data on Australian ornithopods will help to test these suggested affinities. 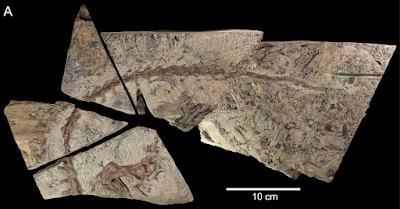 Etymology: From the Latin ‘diluvi,’ for deluge or flood, in reference to the deep high-energy palaeo-river within which the type material was deposited and the palaeo-floodplain upon which the river extended, combined with the suffix ‘-cursor,’ from the Latin for runner.

Derivation of name: To acknowledge the significant contribution of David A. Pickering to Australian palaeontology and in memory of his passing during the production of this work.

Conclusion
Diluvicursor pickeringi nov. gen. et sp. is a new small-bodied ornithopod from the lower Albian of the Eumeralla Formation in the Otway Basin. The taxon is known from an almost complete tail and lower partial right limb of the holotype (NMV P221080), as well as an isolated posterior caudal vertebra (NMV P229456), discovered at the fossil locality of Eric the Red West (ETRW). The deposit, termed the ETRW Sandstone, is interpreted to have been a broad (∼600 m), deep (∼25 m), high-energy meandering river. Sediments and fossils from the ETRW Sandstone indicate that D. pickeringi inhabited a faunally rich, substantially forested riverine floodplain within the Australian–Antarctic rift complex. A further isolated caudal vertebra from the deposit (NMV P228342), interpreted as that of an indeterminate ornithischian, suggests the locality may have hosted at least two small-bodied ornithischians. D. pickeringi grew to at least 2.3 m in length and is characterised by 10 potential autapomorphies, among which, the combination of dorsoventrally low neural arches and transversely broad caudal ribs on the anterior-most caudal vertebrae present a visually defining combination of features.

Features of the caudal vertebrae and pes suggest that D. pickeringi and the two stratigraphically younger, indeterminate ornithopods from Dinosaur Cove, NMV P185992/P185993 and NMV P186047, are closely related. However, D. pickeringi differs from NMV P185992/P185993 by having a far shorter tail (50 vertebrae compared to >71) and from NMV P186047 by having a comparatively shorter, more robust, pes. The phylogenetic position of D. pickeringi investigated through searches within three recently published datasets was unresolved beyond placement within a polytomous clade of non-iguanodontian ornithopods. Various features of the caudal vertebrae and pes suggest that the Eumeralla Formation ornithopods Diluvicursor, NMV P185992/P185993 and NMV P186047 may be more closely related to the Argentinean ornithopods Anabisetia and Gasparinisaura, the Antarctic ornithopod Morrosaurus and possibly Afro-Laurasian dryosaurids, than all other ornithopods. A common progenitor of these taxa is suggested. However, these suggested affinities are to be tested more rigorously within a revised cladistic dataset of Gondwanan ornithopods.

The discovery of D. pickeringi in the ETRW Sandstone indicates that future prospecting efforts in the Eumeralla Formation at locations where coarse, gritty sediments crop-out at the base of deep palaeoriver channels, could lead to significant new discoveries (see also Rich et al., 2009b). The articulated postcrania of similarly sized, but anatomically differing small-bodied ornithopods from the Eumeralla Formation provide unique fossil material for future comparative investigations on dinosaur biomechanics, and how differing locomotor abilities could relate to differing palaeoecosystems.