Thismia Griffith (1845: 341) in Thismiaceae or Burmanniaceae (sensu APG 2016) consists of more than 60 species (Ridley 1924, Jonker 1948, Stone 1980, van Steenis 1982; Merckx 2008). Many new species in this genus have been discovered, and 12 have been described after 2010 (e.g., Dančak et al. 2013, Nuraliev et al. 2014, 2015, Chantanaorrapint & Sridith 2015, Li & Bi 2013, Hroneš et al. 2015). Considering that the majority of these species were collected only once (Jonker 1948), it is likely that many more undescribed species remain hidden in the forests, particularly in the tropical rain forests of Southeast Asia. Borneo is one of the most biodiverse areas for mycoheterotrophs, and our recent botanical exploration in Borneo revealed many previously undescribed mycoheterotrophic species (e.g., Tsukaya et al. 2011, 2014a,b, 2016, Tsukaya & Okada 2005, 2012a,b,c, 2013a,b, Tsukaya & Hidayat 2016, Tsukaya & Suetsugu 2014). In 2016, we conducted a botanical survey in the Malaiu Basin, Sabah, Borneo, with the permission of the Maliau Basin Management Committee (YS/MBMC/2016/184) and the Sabah Biodiversity Council [access license JKM/MBS.1000-2/2JLD.5(23)]. The Maliau Basin Conservation Area (MBCA) is a huge basin surrounded by sandstone ridges and covers approximately 39,000 ha. Few botanical explorations have previously been conducted in this area. During the survey, we encountered a specimen from the MBCA that apparently belongs to Thismia section Euthismia Schltr. subsect. Odoardoa Schlechter (1921: 31) because it has a free inner perianth, spreading, creeping and vermiform roots, perianth lobes equal in length and size, but it differs from all known species. Here, we describe this new species with a revised key to the species of this genus in Malesia.

Thismia bryndonii is similar to T. mullerensis and T. lauriana in having a free perianth lobes equal in size and bifid stigmas, but differs in having two anther appendages and pale-orange streaks on the perianth tube with brown-orange transverse bars inside. Asymmetrical coloration of the perianth lobes is also unique to this species

Distribution:— This species was found in the understory of a dipterocarp forest and is only known from the type locality in the Maliau Basin, Sabah, Borneo.

Etymology:— The species name Thismia bryndonii was chosen in honour of our guide in the Maliau Basin Conservation Area, Bryndone Farone Bernard, who first discovered this new species on a botanical expedition. 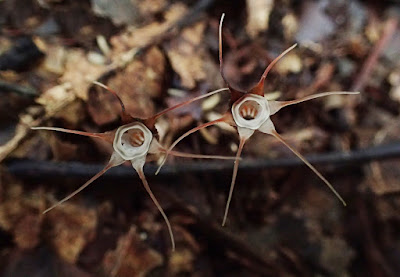