Abstract
The Upper Cretaceous Djadokhta Formation has been intensively surveyed for its fossil vertebrate fauna for nearly a century. Amongst other theropods, dromaeosaurids and parvicursorines are common in the formation, but ornithomimosaurs are extremely rare. A new ornithomimosaur material was discovered from the Djadokhta Formation, represented by eolian deposits, of the Tögrögiin Shiree locality, Mongolia. This is only the third ornithomimosaur specimen reported from this formation, and includes the astragalus, the calcaneum, the third distal tarsal, and a complete pes. The new material is clearly belonged to Ornithomimidae by its arctometatarsalian foot condition and has the following unique characters; unevenly developed pair of concavities of the third distal tarsal, curved contacts between the proximal ends of second and fourth metatarsals, the elongate fourth digit, and a laterally inclined medial condyle on phalanx IV-1. These diagnostic characters of the Djadokhtan ornithomimosaur indicate that this is a new taxon. Our phylogenetic analysis supports three clades within derived ornithomimosaurs, and the new taxon is placed a member of the derived ornithomimosaurs. The present specimen is the first ornithomimid record from eolian Tögrögiin Shiree locality, and is indicative of their capability to adapt to arid environments. 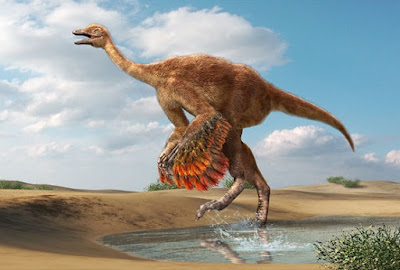 Etymology: The generic name refers to the largest ratite bird Aepyornis~, which has similar pes structure; in Latin, ~mimus = ‘as’ or ‘like’; the species name tugrikinensis refers to the locality where the specimen was found.

Holotype: MPC-D 100/130, articulated left pes preserved with an astragalus that is missing the ascending process, a complete calcaneum, and distal tarsal III (DT-III) (Figs 2, 3 and 4). The original specimen is now housed in the Institute of Paleontology and Geology of the Mongolian Academy of Sciences (IPG-MAS).