[Botany • 2017] Geosiris australiensis • First Record of Geosiris (Iridaceae: Geosiridoideae) from Australasia : A New Record and A New Species from the Wet Tropics of Queensland, Australia

Geosiris Baill. is a small genus of achlorophyllous, mycoheterotrophic herbs that until now consisted of only two species, Geosiris albiflora Goldblatt & J.C. Manning and Geosiris aphylla Baill., the latter being the type species of the genus. Prior to this study, the genus was known only from two islands off the southeast coast of Africa, Madagascar and Mayotte. A recent discovery in Australia reported here expands its geographic range to the Pacific. The Australian taxon represents a species distinct from the two African taxa based on the key morphological characters for species distinction in the genus, namely stigma characteristics. Geosiris albiflora has a somewhat club-like stigma with three coherent lobes, Geosiris aphylla with a stigma terminates in three fringed broad and flat stigmatic lobes, and the Australian Geosiris has a truncate stigma with a short fimbriate margin. Hence, the Australian taxon is formally described here as Geosiris australiensis B. Gray & Y.W. Low. 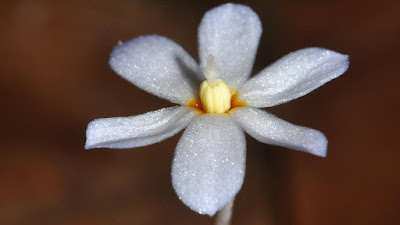 Etymology. – The species epithet refers to Australia, as it is the first generic record for the continent.

Distribution and habitat. – Geosiris australiensis is only known from the tropical rainforests of north-east Queensland, Australia. The only known specimens were growing on a moist forest floor covered with thick organic litter under shaded conditions in the Daintree National Park, a UNESCO World Heritage site.

Scientists in a spin over discovery of new flower species in Daintree
cairnspost.com.au/scientists-in-a-spin-over-discovery-of-new-flower-species-in-daintree/news-story/a623067c8675c7b3649ed4a0ae127f1a 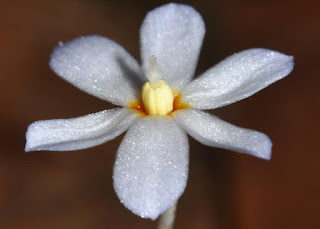