[Ichthyology • 2017] Morphological and Genetic Evolution in eastern Populations of the Macrhybopsis aestivalis complex (Cypriniformes: Cyprinidae), with the Descriptions of Four New Species

For many years the North American cyprinid fish Macrhybopsis aestivalis (common name: Speckled Chub) was regarded as a single widespread and morphologically variable species, occurring in rivers throughout much of the Mississippi Valley and geographically adjacent eastern Gulf slope drainages, west to the Rio Grande basin in Texas, New Mexico, and Mexico. Eisenhour (1997) completed a morphological study of western populations of the Speckled Chub, the results of which appeared thereafter in published form (Eisenhour 1999, 2004). He demonstrated the existence of five valid species west of the Mississippi River (aestivalis, marconis, australis, tetranema, hyostoma), of which the name aestivalis was shown to be restricted to the population occurring in the Rio Grande and the geographically adjacent Rio San Fernando system, in northeastern Mexico. Eisenhour (2004) considered populations throughout the middle Mississippi Valley and its major tributaries to be a single morphologically variable species (hyostoma), and he also indicated that populations of Macrhybopsis from eastern Gulf slope drainages may represent a complex of species. Genetic confirmation of Eisenhour’s conclusions regarding western species appeared in the publication by Underwood et al. (2003), who also showed that western populations of M. hyostoma, as presently recognized, are genetically much more complex than previously considered.

Meanwhile, the present authors were involved in a companion study of eastern populations of Macrhybopsis, for which a genetic summary of the eastern Gulf coast species was published by Mayden & Powers (2004). Based on their findings, four species were recognized from southeastern drainages (identified as species A–D), although no formal taxonomic descriptions were included. Their genetic data, in combination with meristic, morphometric and other morphological data presented herein, form the basis for a revised classification of eastern Macrhybopsis populations, including formal descriptions of the four new species from eastern Gulf coast drainages.

• Macrhybopsis hyostoma (Gilbert 1884)
Shoal Chub
Etymology. The species name hyostoma is derived from the words hyo (=hog) and stoma (=mouth), in reference to the underlying position of the mouth relative to the projecting snout.

Etymology. Named for the late Dr. Herbert T. Boschung, Emeritus Professor of Biology at the University of Alabama, for his many contributions over the years to southeastern ichthyology in general and the state of Alabama in particular, including co-authorship of Fishes of Alabama (Boschung & Mayden 2004).
It should be noted here that the vernacular name “Mobile Chub” used here differs from the name “Gulf Chub” applied by Boschung & Mayden (2004: 209; plate 21A). Considering its geographical distribution, we consider the former name to be more appropriate for the species.

Etymology. Named for Dr. David A. Etnier, Emeritus Professor of Zoology at the University of Tennessee, for his many contributions to southeastern ichthyology and aquatic biology, including co-authorship of the definitive book on the fishes of Tennessee.

Etymology. The species name pallida is in reference to the generally pallid body pigmentation characteristic of this species.

Etymology. Named for Joseph R. Tomelleri, biological illustrator living in Leawood, Kansas, whose unsurpassed and meticulously rendered color illustrations of North American freshwater fishes have graced the pages of numerous scientific publications (including the present one), as well as books such as Fishes of the Central United States (Tomelleri & Eberle 1990) and Fishes of Alabama (Boschung & Mayden 2004). 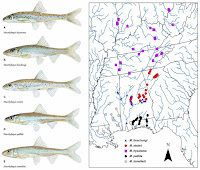 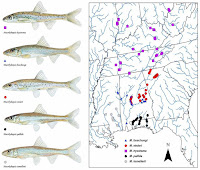