[Arachnida • 2019] Loxosceles tenochtitlan • Under An Integrative Taxonomic Approach: the Description of A New Species of the Genus Loxosceles (Araneae, Sicariidae) from Mexico City

Abstract
A new species of the spider genus Loxosceles Heineken & Lowe, 1832, Loxosceles tenochtitlan Valdez-Mondragón & Navarro-Rodríguez, sp. nov., is described based on adult male and female specimens from the states of Mexico City, Estado de Mexico and Tlaxcala. Integrative taxonomy including traditional morphology, geometric and lineal morphology, and molecules (DNA barcodes of cytochrome c oxidase subunit 1 (CO1) and internal transcribed spacer 2 (ITS2)), were used as evidence to delimit the new species. Four methods were used for molecular analyses and species delimitation: 1) corrected p-distances under neighbor joining (NJ), 2) automatic barcode gap discovery (ABGD), 3) general mixed yule coalescent model (GMYC), and 4) poisson tree processes (bPTP). All molecular methods, traditional, geometric and lineal morphology were consistent in delimiting and recognizing the new species. Loxosceles tenochtitlan sp. nov. is closely related to L. misteca based on molecular data. Although both species are morphologically similar, the average p-distance from CO1 data was 13.8% and 4.2% for ITS2 data. The molecular species delimitation methods recovered well-supported monophyletic clusters for samples of L. tenochtitlan sp. nov. from Mexico City + Tlaxcala and for samples of L. misteca from Guerrero. Loxosceles tenochtitlan sp. nov. is considered a unique species for three reasons: (1) it can be distinguished by morphological characters (genitalic and somatic); (2) the four different molecular species delimitation methods were congruent to separate both species; and (3) there is variation in leg I length of males between both species, with the males of L. misteca having longer legs than males of L. tenochtitlan sp. nov., also morphometrically, the shape of tibiae of the palp between males of both species is different.

Etymology: The species is a noun in apposition dedicated to Tenochtitlán (Nahuatl language) city, a large Mexica city-state in what is now Mexico City where the type locality is located. Tenochtitlán was built on an island in what was then Lake Texcoco in the Valley of Mexico, being the capital of the expanding Aztec Empire in the 15th century. 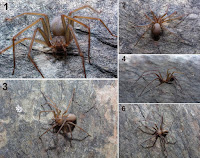