Abstract
A distinctive species, Vanilla denshikoira, is described from the North West Amazon, in Colombia, within the Guiana Shield region. The species has morphological features similar to those of species in the Vanilla planifolia group. It is an important addition to the vanilla crop wild relatives, bringing the total number of species in the V. planifolia group to 21. Vanilla denshikoira is a narrow endemic, known from only a single locality, and highly vulnerable to anthropological disturbance. Under IUCN criteria it is categorized CR. The species has potential value as a non-timber forest product. We recommend a conservation program that includes support for circa situm actions implemented by the local communities.

Diagnosis:—The new species is similar to Vanilla aspericaulis, V. capixaba, and V. cristagalli, sharing with them a concave lip base, a more or less tri-lobed lip, and a conspicuous tuft of trichomes on the recurved lip apex that is connected to the penicillate callus by a central area of tuberculate papillae and trichomes. The new species may be easily distinguished by the external longitudinal canal running from the lip base to the apex of the reflexed midlobe, and the papillae and elongated trichomes on the ventral lip surface covering the tuberculous keel and central veins from the base to the penicillate callus. 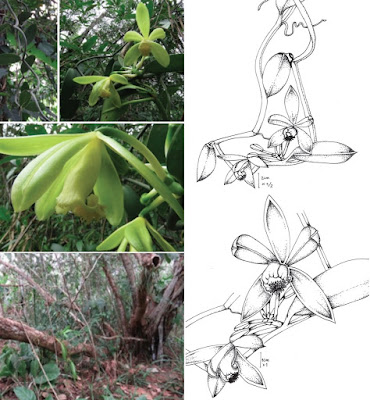 Etymology:— The epithet refers to the name of a female figure in the mythology of the Puinave indigenous community, native to the department of Guainía, Colombia. The name ´Denshikoira´ translates in English to “perfumed woman”. Denshikoira, also known as the Princess Inírida, occupies a central position in Puinave culture, with her myth representing the freedom and equality of women. The name was chosen by Lucy Teresita García Agapito, a member of the Puinave Indigenous community of Remanso-Chorrobocón.

Distribution and habitat:— Vanilla densikoira is known only from the two fertile plants in the Type locality, the first close to the River Inírida, in seasonally-flooded, medium-height (between 10–20 m), open (< 60% canopy cover) forest at 100 m elevation, and the second also in medium-height, open forest on an igneous outcrop, at 265 m elevation. The floristic composition of these sites is notable for the presence of the following tree species: Clusia columnaris Engler in Martius (1888: 432), Casearia javitensis Kunth in Humboldt, von Bonpland & Kunth (1821: 366), Tapirira guianensis Aublet (1775: 188), and Chrysophyllum bombycinum Penn (1990: 588).

Conservation status:— Vanilla denshikoira has an apparent highly restricted distribution, apparent rarity, and both known individuals are highly vulnerable to human activities. Based on the IUCN criteria the species is categorized as Critically Endangered-CR: A3c; B1ab (i,ii,iii,iv). 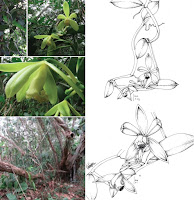 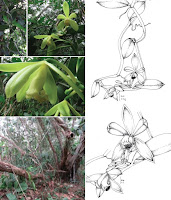