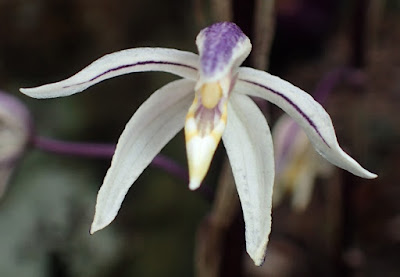 Aphyllorchis maliauensis is similar to A. montana Reichenbach (1876: 57) but differs in having larger narrowly ovate to lanceolate sepals and larger lanceolate lateral petals.

Distribution, phenology, and conservation status:— Fewer than 10 individuals of Aphyllorchis maliauensis were observed at two locations in the wet understory of a kerangas forest in the Maliau Basin Conservation Area, which is dominated by Agathis species and dipterocarps. In addition, only one individual of A. maliauensis was observed in the Imbak Canyon Conservation Area, Sabah, under a lowland dipterocarp forest. Aphyllorchis maliauensis flowers in mid-August in both populations. Furthermore, it is likely that A. maliauensis is distributed more widely because it seems to have sometimes been misidentified as the more widespread species, A. montana, which has similar gross morphology. For example, the Aphyllorchis sp. recorded as A. montana by Beaman et al. (2001; Sarawak, Borneo) and Wood (2003; Sabah, Borneo) appears identical to A. maliauensis, judging from their photographs.

However, the original descriptions and subsequent literature clearly indicate that there is little morphological variation in A. montana sensu Reichenbach (1876), despite its extensive distribution, which includes Sri Lanka, Assam, southern India, the Philippines, Borneo, Thailand, Taiwan, Japan and Indonesia (Reichenbach 1886, Hooker 1890, Schlechter 1906, Ames 1908, Hayata 1911, Downie 1925, Fukuyama 1934, Roy et al. 2009, Aravindhan et al. 2013, Rao & Kumar 2015, Fig. 4). Because the morphological differences between A. maliauensis and A. montana are clear and stable, A. maliauensis should be treated as an independent species rather than as an infraspecific taxon of A. montana. Conducting additional surveys for A. maliauensis during the flowering season would reveal its precise distribution. 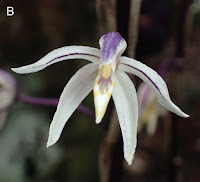