Abstract
Here, we describe the odobenid Nanodobenus arandai gen. et sp. nov., based on a nearly complete left mandible from the mid to late Miocene Tortugas Formation in Baja California Sur. Nanodobenus is distinguished among odobenids by displaying a unique combination of plesiomorphic and derived characters, such as narrow mandibular symphysis, well-developed genial tuberosity, bilobed canine and p2 roots, bulbous post-canine teeth with the paraconid, protoconid and hypoconid, and smooth lingual cingula. Moreover, it is characterized by its small adult body length, which is estimated at about 1.65 m. Throughout the Miocene–Pliocene odobenids are characterized by an increase in body size, especially after the extinction of desmatophocids in the late Miocene. The small size of Nanodobenus departs from this trend, demonstrating that there was greater size disparity among odobenids in the mid–late Miocene than previously thought. It is hypothesized that Nanodobenus occupied a niche that was later on occupied by similar-sized otariids, such as Thalassoleon mexicanus, which occurs sympatrically with large odobenids in the overlying Almejas Formation.

Etymology. The name derives from the combination of ‘nano’, from the Latin ‘nanus’ which translates to dwarf, in reference to the small size of the specimen and estimated body size, combined with Odobenus, the genus of extant walrus, Odobenus rosmarus (Linnaeus, 1758), and the occasionally used suffix in odobenids (e.g. Archaeodobenus). The specific epithet honours Dr Francisco Aranda-Manteca (UABC) in recognition of his mentorship to the junior author and contributions to the knowledge of extinct marine vertebrates of Baja California and Baja California Sur. 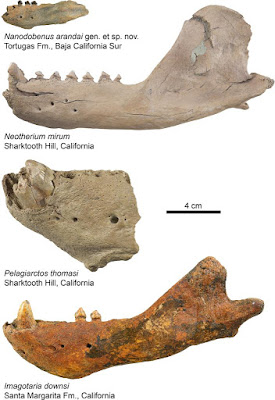 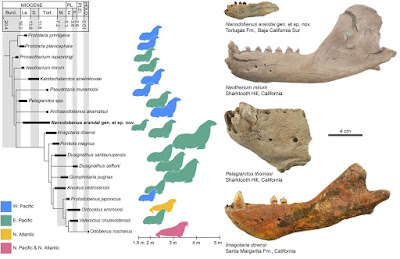 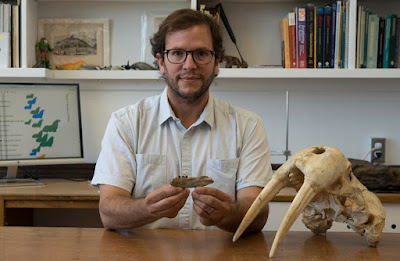 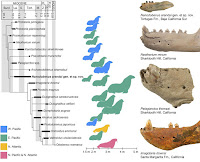