Seed-finches are small-sized Neotropical granivorous birds characterized by extremely strong and thick beaks. Among these birds, the Great-billed Seed-Finch Sporophila maximiliani has been selectively and intensively trapped to the extent that has become one of the most endangered bird species in South America, yet its taxonomy remains complex and controversial. Two subspecies have been recognized: S. m. maximiliani (Cabanis, 1851), mainly from the Cerrado of central South America, and S. m. parkesi Olson (= Oryzoborus m. magnirostris), from northeastern South America. Originally, S. m. parkesi was diagnosed as being larger than the Large-billed Seed-Finch, S. c. crassirostris (Gmelin, 1789), but proper comparisons with S. m. maximiliani, which is larger than S. c. crassirostris, were never performed. Here we provide a review of the taxonomic and nomenclatural history of S. maximiliani, reevaluate the validity and taxonomic status of the subspecies based on morphological characters, and significantly revise its geographic distribution. Analyses based on plumage patterns and a Principal Component Analysis of morphometric characters indicated that S. m. parkesi is most appropriately treated as a synonym of the nominate taxon, which results in a monotypic S. maximiliani comprising two disjunct populations. Further, we conducted systematic searches for S. maximiliani in Brazil, in an attempt to obtain natural history information. After more than 6,000 hours of fieldwork in 45 areas of potential and historical occurrence, S. maximiliani was located only in two sites, in marshy environments called veredas, confirming the critical conservation status of this species, at least in Brazil. We discuss the conservation potential for, and the problems involved with, captive breeding of S. maximiliani for reintroduction into the wild. 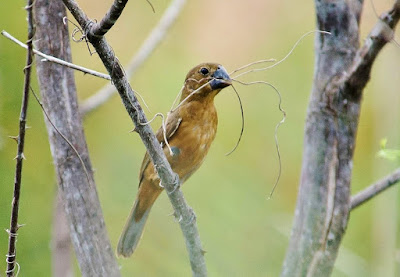