[Paleontology • 2018] Reanalysis of the Phylogenetic Status of Nipponosaurus sachalinensis (Ornithopoda: Dinosauria) from the Late Cretaceous of Southern Sakhalin

Abstract
Nipponosaurus sachalinensis is the only definitive lambeosaurine hadrosaurid from Sakhalin Island of Russia. Previous studies suggested it was a member of Lambeosaurini (derived lambeosaurines). However, its phylogenetic status within Lambeosaurini remains controversial. In addition, some studies argued the juvenile ontogenetic stage of the holotype and regarded Nipponosaurus as an invalid taxon. In order to solve these problems, its definite growth stage is determined through histological studies. Absence of a line of arrested growth, presence of osteons with large vascular spaces, and presence of primary bone remnants even in the highly modified regions of the femur confirm that the holotype was a juvenile. More than a hundred of the 350 characters used to determine the phylogenetic position of Nipponosaurus are ontogenetically variable characters based on the different ontogenetic stages of Hypacrosaurus stebingeri. Our phylogenetic analysis reveals that Nipponosaurus is a basal lambeosaurine hadrosaurid, much further down in the tree than previously suggested, and shows a polytomy with Blasisaurus and Arenyisaurus. This study also indicates that Nipponosaurus is a valid taxon because it possesses unique characters within the Lambeosaurinae (presence of massive surangular anterodorsal process, presence of lateral shelf of the dentary, and a relatively short ulna), which are independent of ontogeny. 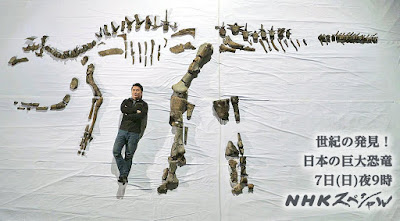 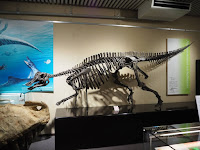 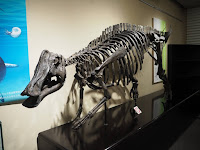 Conclusions:
Histological observations provide the first direct evidence that Nipponosaurus is an immature specimen. By comparing different ontogenetic stages of H. stebingeri and reviewing previous studies, up to 102 characters previously used in phylogenetic analyses are considered ontogenetically controlled within Hadrosauridae. Our phylogenetic analysis positions Nipponosaurus within a monophyletic clade of Arenysaurus and Blasisaurus, which has a sister clade relationship with the clade comprised of Parasaurolophini and Lambeosaurini. This newly recovered phylogenetic position supports a strong affinity of Asian and European lambeosaurids. The resulting relationships of this genus suggest that this taxon is valid, and represents one of the few hadrosaur specimens in Far East Asia. 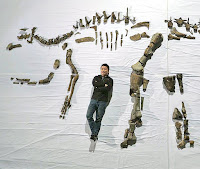