Megalestes gyalsey spec. nov. is described from a single male from Trongsa District in Bhutan. The species was discovered during field work conducted in 2015 for the Bhutan invertebrate biodiversity project. The species is named in honour of His Royal Highness Crown Prince Jigme Namgyel Wangchuck, the Gyalsey of Bhutan, on the occasion of his first birthday. 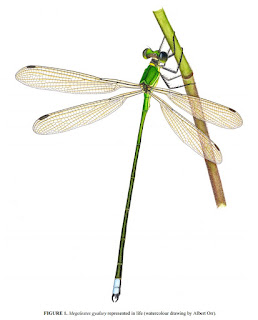 Etymology. The specific epithet gyalsey, is a noun in apposition. The species is named in honour of His Royal Highness Crown Prince of Bhutan, The Gyalsey, Jigme Namgyel Wangchuck, on the occasion of his first birthday

Discussion:
Megalestes gyalsey is the eighteenth species of Megalestes. It is currently known only from the type locality in Bhutan but is likely to occur in adjacent areas of India and might be found in the eastern parts of Nepal. Further field work might result in the discovery of more species of Megalestes, especially in parts of China, but new species might yet be found in the Himalayan region as well. There is little information on the habitat and life history of Megalestes gyalsey or any other species of the genus Megalestes and it would be interesting to study the behaviour and seasonality of the species. Although only one location is known for the species, there is no reason to assume that it is threatened, as much probably suitable habitat is present in Bhutan. Nonetheless, it would be desirable to further explore the region in order to locate more populations. 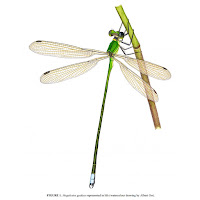