[Ecology • 2017] The Ecological Significance of Secondary Seed Dispersal by Carnivores 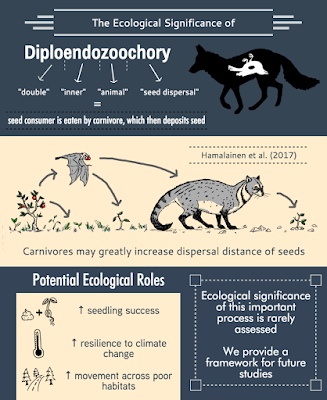 Animals play an important role in the seed dispersal of many plants. It is increasingly recognized, however, that the actions of a single disperser rarely determine a seed's fate and final location; rather, multiple abiotic or animal dispersal vectors are involved. Some carnivores act as secondary dispersers by preying on primary seed dispersers or seed predators, inadvertently consuming seeds contained in their prey's digestive tracts and later depositing viable seeds, a process known as diploendozoochory. Carnivores occupy an array of ecological niches and thus range broadly on the landscape. Consequently, secondary seed dispersal by carnivores could have important consequences for plant dispersal outcomes, with implications for ecosystem functioning under a changing climate and across disturbed landscapes where dispersal may be otherwise limited. For example, trophic downgrading through the loss of carnivores may reduce or eliminate diploendozoochory and thus compromise population connectivity for lower trophic levels. We review the literature on diploendozoochory and conclude that the ecological impact of a secondary vs. primary seed disperser depends on the relative dispersal distances, germination success, and the proportion of seeds exposed to secondary dispersal by carnivores. None of the studies up to present day have been able to rigorously assess the ecological significance of this process. We provide a framework of the components that determine the significance of diploendozoochory across systems and identify the components that must be addressed in future studies attempting to assess the ecological importance of diploendozoochory. 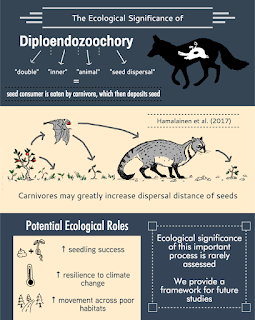 Several authors have suggested that polychory is likely a much more common phenomenon than has been previously assumed (Ozinga et al. 2004, Vander Wall and Longland 2004) and can be more beneficial for the dispersing plant than single-phase dispersal (Vander Wall and Longland 2004). While these studies have largely concentrated on abiotic vectors and short-distance, second-phase dispersal by invertebrates and scatter-hoarding rodents, the impact of carnivores may be similarly important, particularly in discontinuous habitats. Secondary dispersal by carnivores is by no means exclusive of the types of diplochory defined by Vander Wall and Longland (2004); rather, it is very likely that further seed transport by ants, dung beetles, or scatter-hoarding rodents often occurs after seeds are deposited by the secondary disperser.

Our framework provides guidelines for future research, with predictions that should aid in targeting systems that are likely to be most affected by carnivore involvement in seed dispersal. In addition to disrupting heavy seed predation pressure, carnivores that intercept large proportions of a plant population's seeds and significantly alter the germination or recruitment success of seeds relative to the primary disperser will most likely be an important ecological force for the plant species and, possibly, the community structure. Another important role for far-ranging secondary dispersers may involve long-distance dispersal or gene flow between remote populations or habitat fragments. While carnivore effects will likely be small in most systems, such circumstances may indeed result in secondary seed dispersers significantly influencing plant range shifts, dispersal success, fitness, and potentially species viability.

It is currently unknown how important the phenomenon is ecologically, but given its potentially vast prevalence and the possible implications, it is possible that ignoring it could impair the interpretation of broad ecological patterns or hinder conservation efforts. Considering diploendozoochory as a part of the dispersal mechanism of plants can potentially improve modeling outcomes for range shifts due to climate change, or help explain current plant distributions, as historical effects of carnivores (or other large-bodied animals; Pakeman 2001) may have influenced plant movement rates. Where the secondary disperser facilitates different dispersal processes than are accomplished by other means of dispersal, carnivore involvement may have important consequences for the spread of invasive plant species, as well as the ability of plants to adapt to habitat loss and changing climatic conditions. Where such relationships exist, the extinction or decline of involved species can affect multiple trophic levels and disrupt ecosystem functions.