[Herpetology • 2017] Geckolepis megalepis • Off the Scale: A New Species of Fish-scale Gecko (Squamata: Gekkonidae: Geckolepis) with Exceptionally Large Scales from the Limestone Karst of Ankarana in northern Madagascar

The gecko genus Geckolepis, endemic to Madagascar and the Comoro archipelago, is taxonomically challenging. One reason is its members ability to autotomize a large portion of their scales when grasped or touched, most likely to escape predation. Based on an integrative taxonomic approach including external morphology, morphometrics, genetics, pholidosis, and osteology, we here describe the first new species from this genus in 75 years: Geckolepis megalepis sp. nov. from the limestone karst of Ankarana in northern Madagascar. The new species has the largest known body scales of any gecko (both relatively and absolutely), which come off with exceptional ease. We provide a detailed description of the skeleton of the genus Geckolepis based on micro-Computed Tomography (micro-CT) analysis of the new species, the holotype of G. maculata, the recently resurrected G. humbloti, and a specimen belonging to an operational taxonomic unit (OTU) recently suggested to represent G. maculata. Geckolepis is characterized by highly mineralized, imbricated scales, paired frontals, and unfused subolfactory processes of the frontals, among other features. We identify diagnostic characters in the osteology of these geckos that help define our new species and show that the OTU assigned to G. maculata is probably not conspecific with it, leaving the taxonomic identity of this species unclear. We discuss possible reasons for the extremely enlarged scales of G. megalepis in the context of an anti-predator defence mechanism, and the future of Geckolepis taxonomy.

Diagnosis. A species of the genus Geckolepis based on its overall morphology and large, fish-like scales (similar to cycloid scales in terms of the extent of overlap), as well as its phylogenetic position (Lemme et al., 2013; Fig. 1). Geckolepis megalepis differs from all of its congeners by the possession of the following suite of characters: innermost pair of postmental scales in broad contact (condition A/B, Fig. 4), SVL ≤ 69.5 mm, infralabials to anterior margin of eye 4.5–4.8, 17–18 scales rows around the midbody, 27–31 ventral scales between the postmentals and the vent, and the absence of a dark lateral stripe, and typical midbody dorsal scales measuring 7.3–8.3% of the SVL in length. Osteologically, G. megalepis is characterised by a narrow infraorbital fenestra, a bulging nasal cavity, nasals with straight sides, a well developed anterior extension of the subfrontal process, a notched premaxilla-vomer fenestra, scapular ray of scapulocoracoid not surpassing the clavicle, and posteriorly curved pubic tubercle of the pubis. Additionally, it is separated by an uncorrected pairwise genetic distance in the mitochondrial ND4 gene of ≥10.1% from all other lineages of Geckolepis and has a unique CMOS haplotype (Lemme et al., 2013).

Etymology. The specific epithet is derived from the two Greek stems μέγας (mégas) meaning ‘very large’ and λεπίς (lepís) meaning ‘scale’, and refers to the large size of the scales of this species in comparison to its congeners and other geckos, which aids also in its diagnosis. 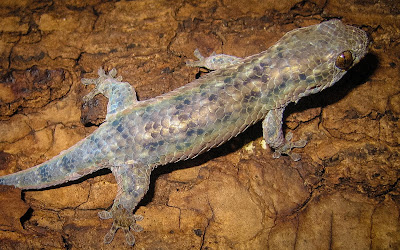 Habitat, natural history, and conservation status. Geckolepis megalepis was observed active at night both in the rainy and dry seasons, on trees (see Figs. 3A–3B) and tsingy limestone rock. When captured, these geckos showed a strong tendency to autotomize large parts of their scales, leading to partly ‘naked’ geckos without any visible (bloody) lesions (Fig. 3C). In a subjective comparison this tendency appeared to be even more developed than in other Geckolepis species. 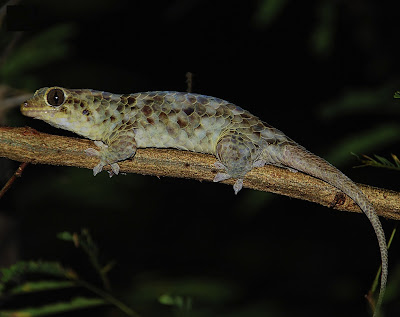 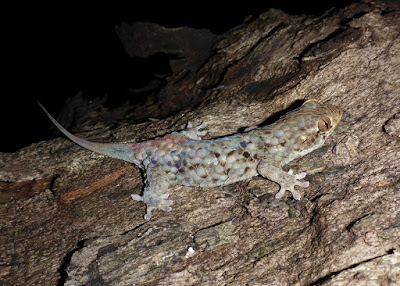