[Mammalogy • 2017] Galagoides kumbirensis • A Giant Among Dwarfs: A New Species of Galago (Primates: Galagidae) from Angola 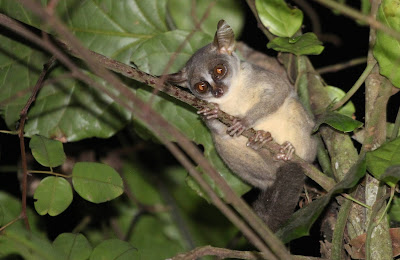 Based on vocalization recordings of an unknown galago species, our main objectives were to compare morphology and call structure with known closely-related taxa and describe a new species of galago.

We conducted field surveys in three forest habitats along the escarpment region in western Angola (Kumbira Forest, Bimbe Area, and Northern Scarp Forest), and examined galago specimens from museums worldwide. We digitized and analyzed calls using Avisoft SASLab Pro software. We also compared museum specimens from Angola with other Galago and Galagoides specimens, and conducted comparative analyses (ANOVA and between group principle component analysis) based on a set of twelve linear measurements of skulls and teeth.

We describe the new species to which we give the name Angolan dwarf galago, Galagoides kumbirensis sp. nov. The new species has a loud and characteristic crescendo call, used by other Galagoides spp. (sensu stricto) in West Africa to attract companions and repel rivals. However, this call shows species-typical differences from its closest relatives. Galagoides kumbirensis sp. nov. is also distinguished by differences in the skull morphology, pelage color and facial markings, as well as a larger body size, similar to that of Galago moholi, which is not known to be sympatric.

This discovery points to the importance of Angolan forests as refuges for endemic biodiversity. These forests are under severe threat from overexploitation, and there is an urgent need to establish conservation measures and designate protected areas. 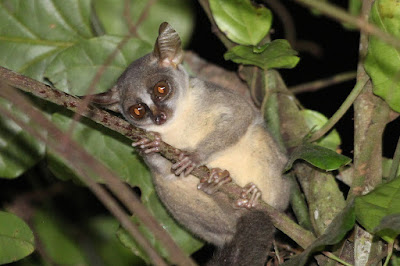 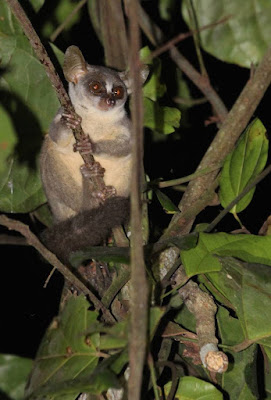 This new primate is a ‘giant’ among tiny bush babies https://news.mongabay.com/2017/02/this-new-primate-is-a-giant-among-tiny-bushbabies/ via  @mongabay
New species of bushbaby found in disappearing forests of Angola https://www.newscientist.com/article/2121970-new-species-of-bushbaby-found-in-disappearing-forests-of-angola