Abstract
The flying squirrels of the tribe Pteromyini (Family Sciuridae) currently include 15 genera of which the genus Biswamoyopterus comprises two recognized species, B. biswasi Saha, 1981 and B. laoensis Sanamxay et al., 2013. These two species were each described from only one specimen that are separated from each other by 1,250 kilometres in southern Asia, where they occur in northeast India and central Lao PDR respectively. In 2017 and 2018, two specimens of Biswamoyopterus were discovered from Mount Gaoligong, west Yunnan province, southwest China (between the type locality of the two recognized species). This study aimed to evaluate the taxonomic status of these two newly acquired specimens of Biswamoyopterus by comparing their morphology with the two described species of the genus. The results of this study showed that the specimens from Yunnan province (China) differed from both B. laoensis and B. biswasi in both pelage colour and craniology, and should be recognised as a distinct species, Biswamoyopterus gaoligongensis sp. nov., which is formally described here. This study contributes to the understanding of the flying squirrels of southern Asia and identifies an additional species that appears to be endemic to southwest China; however, more research is required to provide details of its ecology, distribution, and conservation status. 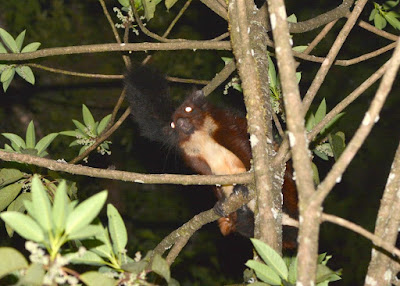 Etymology: The specific name is derived from Mount Gaoligong, the type locality of the new species and –ensis, Latin for belonging to.

Diagnosis: Biswamoyopterus gaoligongensis sp. nov. can be distinguished from the other two described species of Biswamoyopterus by the following combination of traits: 1) The ear tufts at the base of the posterior margins of ears are bicolored, basally white and terminal black. The scrotum is dark brown which strongly contrasts with the yellowish-white abdominal pelage. 2) The muzzle is very short, and the zygomatic arch is distinctly expanding outward, making the outline of the skull short and wide. The outer margin of the nasal bone, the orbital margin of the frontal bone, and the post-orbital margin of the frontal bone are almost parallel to the midline of skull on the dorsal view. The central point of the posterior margin of the palatal bones lies in front of the posterior margin of M3. 3) M1 and M2 are sub-square in outline, and as large as P4. The hypoconid of P4-M2 are very developed, strongly pointed towards posterior buccal side.

Distribution: Apart from the locality of the holotype, there are two more localities in Yunnan, China, where the Biswamoyopterus gaoligongensis sp. nov. was photographed. These include Linjiapu, 10 km west of the type locality; and Banchang, 9 km south of the type locality (Fig. 1). Although these three localities cover the east and west slopes of Mount Gaoligong (the watershed of the Irrawaddy River and the Nu River [Salween River]), they are all restricted in a small area of southern Mount Gaoligong.

Natural history: Little is known about the natural history of Biswamoyopterus gaoligongensis sp. nov. The holotype was collected from evergreen broad-leaved forest at an altitude of 2,000 meters above sea level. A set of photos taken in Linjiapu showed a Biswamoyopterus gaoligongensis sp. nov. resting on the branches of Daphniphyllum sp. Petaurista yunanensis, P. elegans, and Hylopetes alboniger were also collected in the same habitat where the holotype was collected. 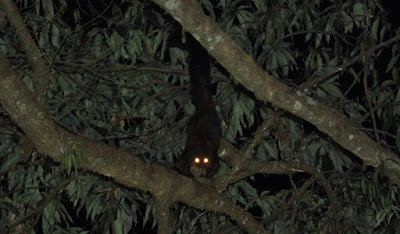 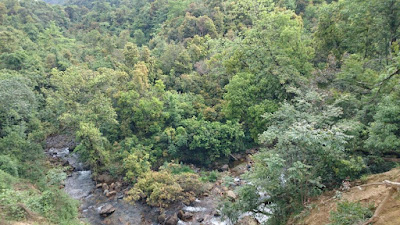