Abstract
The extinct neoteleost family Dercetidae includes elongate, long-jawed marine fishes that are known from the Late Cretaceous to Paleocene in deposits from the Levant, Europe, North Africa, England, Mexico and Brazil. The fossil record of the family in South America is very sparse and previously was restricted to outcrops in Brazil. Herein we describe a new dercetid fish from the Turonian of Colombia, †Candelarhynchus padillai gen. et sp. nov. A single articulated specimen is preserved in part and counterpart; the posterior part of the fish is missing. The specimen differs from other dercetid species by the following unique combination of morphological features: lack of scutes on the flanks of the body, presence of a single pair of transverse processes associated with the abdominal vertebrae, roofed posttemporal fossa, single row of small conical teeth on the dentary and maxilla, toothless premaxilla ornamented with pronounced longitudinal striations and protruding forward far beyond the anterior end of the dentary, and relatively large pectoral fins positioned high on the body. When included in a phylogenetic analysis of †Enchodontoidei, †C. padillai gen. et sp. nov. falls within a monophyletic family Dercetidae and is placed as sister taxon to the Late Cretaceous dercetid †Hastichthys from Israel, indicating faunal connections between the Eastern and Western Tethys. The new taxon provides novel insights into the distribution of dercetid fishes in the Western Tethys region during the early Late Cretaceous. 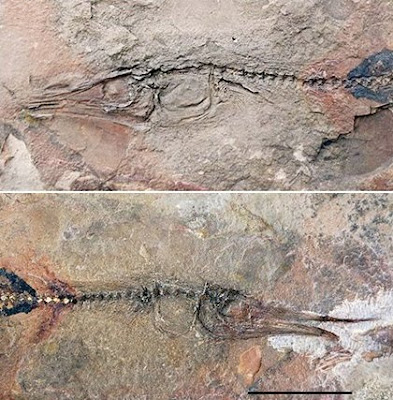 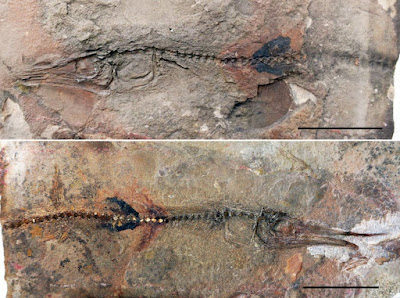 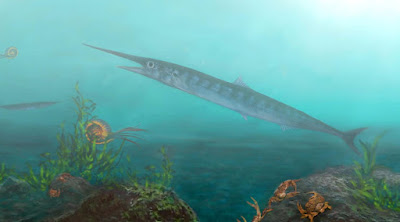 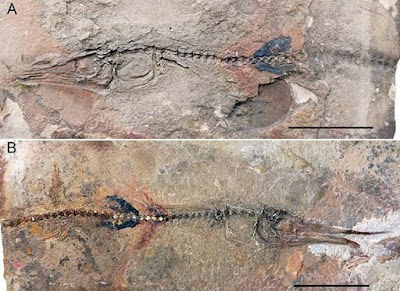