[Entomology • 2018] Revision of the Genus Callipia Guenée, 1858 (Lepidoptera, Geometridae), with the Description of 15 New Taxa

All here recognised 26 species are illustrated and the available molecular genetic information of 25 species, including Barcode Index Numbers (BINs) for most of the taxa is provided. The almost threefold increase from 10 to 26 valid species shows that species richness of tropical moths is strongly underestimated even in relatively conspicuous taxa. Callipia occurs from medium to high elevations in wet parts of the tropical and subtropical Andes from Colombia to northern Argentina. The early stages and host plants are still unknown. 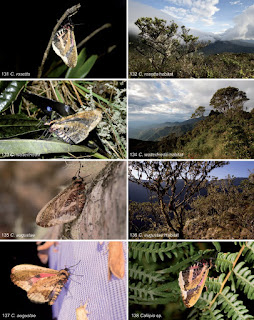