Abstract
A recent study on a group of rough-skinned Gephyromantis frogs from Madagascar (Anura: Mantellidae: Mantellinae) established a new subgenus, Asperomantis, with five described species and one undescribed candidate species. Based on newly collected material from the Bealanana District, we address the taxonomy of this candidate species, and reveal that it consists of two populations with low genetic and morphological divergence but considerable bioacoustic differences that are obvious to the human ear. As a result, we describe some of the specimens formerly assigned to Gephyromantis sp. Ca28 as Gephyromantis angano sp. n. and assign the remaining specimens from a locality between Bealanana and Antsohihy to a new Unconfirmed Candidate Species, G. sp. Ca29. Gephyromantis angano sp. n. is a small species that strongly resembles G. asper and G. ceratophrys, but it differs from these and all other Gephyromantis species by a unique, clinking advertisement call. The new species may be highly threatened by habitat fragmentation, but at present we recommend it be treated as Data Deficient until more data are available to assess its distribution. We discuss the curious relationship between G. angano sp. n. and G. sp. Ca29, which we suspect may represent a case of incipient speciation. We also identify two additional new Unconfirmed Candidate Species of Gephyromantis based on sequence data from other specimens collected during our surveys in the Bealanana District.

Etymology: Angano is a Malagasy word meaning ‘fable’. The new material for this species was collected on Expedition Angano, a research expedition to the Bealanana District of northern Madagascar to assess the impacts of forest fragmentation on the reptiles and amphibians. The epithet is used as an invariable noun in apposition to the genus name.

Natural history and distribution: One specimen of this species has been collected in Antsahan’i Ledy, and numerous specimens of this species were encountered during fieldwork on the Ampotsidy mountains (Fig. 7). Calling males were generally found in association with slow flowing water, in the case of the holotype at the source of a spring, in close syntopy with Boophis madagascariensis and a Mantidactylus (Brygoomantis) species. Males called up to 1 m above the ground from fern fronds and other low foliage. Females were found both near to and away from water, during the day and at night, but were less commonly encountered. No eggs were observed, but highly ovigerous females were found in January (e.g. Fig. 6e). The call of the species is loud and carries over long distances, so that it can be heard alongside the calls of Boophis madagascariensis from well outside of some small forest fragments in the vicinity of Ampotsidy. In a small forest fragment where vouchers of Gephyromantis (Asperomantis) tahotra were collected (1368 m a.s.l.), G. angano sp. n. could also be heard; this appears to be the first ever record of any two Asperomantis species occurring in close syntopy (Vences et al. 2017). 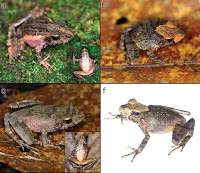 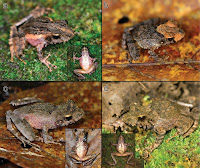