[Herpetology • 2020] Brookesia perarmata • Armored with Skin and Bone: A Combined Histological and μCT‐Study of the Exceptional Integument of the Antsingy Leaf Chameleon

Abstract
Madagascar's endemic ground‐dwelling leaf chameleons (Brookesiinae: Brookesia Gray, 1865 + Palleon Glaw, et al., Salamandra, 2013, 49, pp. 237–238) form the sister taxon to all other chameleons (i.e., the Chamaeleoninae). They possess a limited ability of color change, a rather dull coloration, and a nonprehensile tail assisting locomotion in the leaf litter on the forest floor. Most Brookesia species can readily be recognized by peculiar spiky dorsolateral projections (“Rückensäge”), which are caused by an aberrant vertebral structure and might function as body armor to prevent predation. In addition to a pronounced Rückensäge, the Antsingy leaf chameleon Brookesia perarmata (Angel, 1933) exhibits conspicuous, acuminate tubercle scales on the lateral flanks and extremities, thereby considerably enhancing the overall armored appearance. Such structures are exceptional within the Chamaeleonidae and despite an appreciable interest in the integument of chameleons in general, the morphology of these integumentary elements remains shrouded in mystery. Using various conventional and petrographic histological approaches combined with μCT‐imaging, we reveal that the tubercle scales consist of osseous, multicusped cores that are embedded within the dermis. Based on this, they consequently can be interpreted as osteoderms, which to the best of our knowledge is the first record of such for the entire Chamaeleonidae and only the second one for the entire clade Iguania. The combination of certain aspects of tissue composition (especially the presence of large, interconnected, and marrow‐filled cavities) together with the precise location within the dermis (being completely enveloped by the stratum superficiale ), however, discriminate the osteoderms of B. perarmata from those known for all other lepidosaurs. 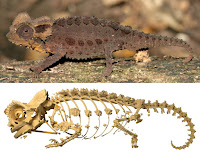